Why Buhari must be pressured to sign amended Electoral Act… 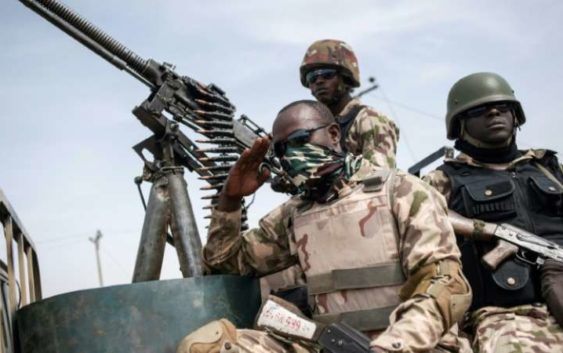 Jihadists from the IS-supported Islamic State West Africa Province (ISWAP) overran a naval base and a multinational joint task force (MNJTF) post in the fishing town of Baga after a fierce battle, the sources told AFP.

The Chief of Army Staff, Lt.-Gen. Tukur Buratai (2nd, L) assisted by other senior officers serve meal to troops at front lines of campaign against Boko Haram insurgents at a special Christmas meal organise for the troops in the frontline in Borno on Wednesday
Boko Haram has repeatedly struck military outposts in the region in recent months.

Fighters in several vehicles stormed Baga and engaged troops in intense fighting at the MNJTF base which hosts units from Nigeria, Niger, Chad and Cameroon.
Suggested News
Mgid

The insurgents also sacked a naval base in Mile 3 which lies five kilometres from Baga, a military source who asked not to be identified told AFP.

“The troops were overpowered and forced to withdraw,” the source, adding that “the terrorists carted away guntrucks, ammunition and multiple rocket launchers from the base.”

Troops from the two bases withdrew to another naval base at Fish Dam on the shores of Lake Chad, the military source said.

That base was well secured, and resisted several attempts by Boko Haram fighters to overrun it, the source added.

The jihadists then retreated and the troops decided not to pursue them to avoid running into an ambush, a strategy Boko Haram often employs against the military, the officer said.

Nigerian army spokesman Sani Usman confirmed the attack in a statement which said the assault began at about 7:00 pm local time (1800 GMT).

“The troops along with their Nigerian Navy counterparts put up a very determined fight” all night, he said, adding that one navy personnel was killed.

Troop reinforcements were in pursuit of the Boko Haram fighters, he said.

In January 2015, Boko Haram overran the MNJTF base and took control of Baga after killing hundreds of residents and forcing thousands to flee to Maiduguri.
The town was later retaken, but jihadists continue to attack the military and civilians in the area, which is an ISWAP stronghold.

Its fighters occupy camps on many islands in Lake Chad.

Boko Haram’s nine-year insurgency has killed 27,000 people and displaced two million others, sparking a dire humanitarian crisis in the region. The fighting has also spilled into Nigeria’s northern neighbours Chad, Niger and Cameroon.

JUST IN: ‘IPOB Will Challenge Every Document Signed By Jubril At Int’l Court’ — Nnamdi Kanu

JUST IN: The demand for Biafra is in line with the UN charter – Israeli prime Minister