“This Is Not Acceptable” – NLC Reacts As FG Increases…

JUST IN: Buhari Arrogate Himself, Mocks Atiku At Election Tribunal, Says ‘I Cannot Be Removed’ 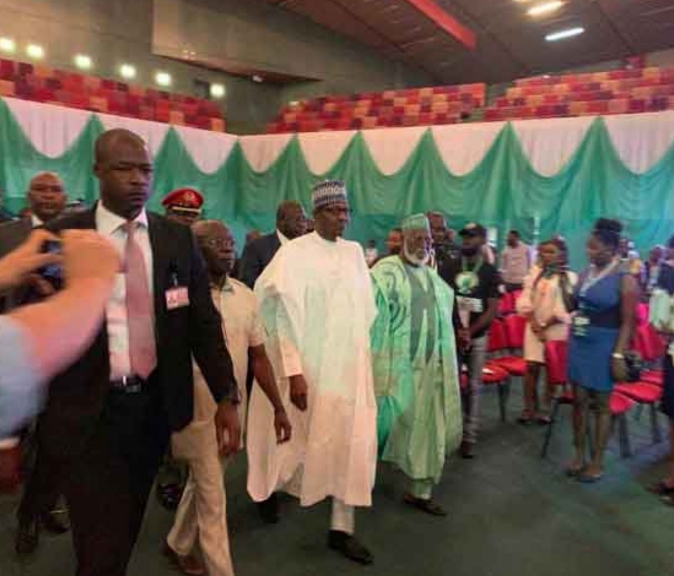 SAHARANEWS – Report reaching our news room has it that President Muhammadu Buhri on Wednesday, took a swipe at his closest rival in the 2019 presidential election, Alhaji Atiku Abubakar of the Peoples Democratic Party (PDP), describing him as a serial loser.

In a preliminary objection he filed to challenge the competence of a petition that Atiku lodged against his re-election on February 23, President Buhari boasted the electorate always chose him ahead of Atiku, in both inter-party or intra-party contests, using the 2014 presidential primaries the All Progressives Congress (APC), as an instance.

“The respondent further averred that at every previous instance, whether at intra-party or inter-party contests, where he and the 1st petitioner had vied, he has always been the preference of the electorate and/or delegates.

“In particular, at the primary election conducted by the 3rd respondent (APC) in 2014, to pick its presidential candidate for the 2015 election, the 1st petitioner and respondent, amongst others, were the candidates; and while the respondent polled 3,430 votes, 1st petitioner came a distant third with 954 votes,” the president stated in the process he filed before the Presidential Election Petition Tribunal sitting in Abuja.

Buhari also questioned the powers of the tribunal to nullify his election victory at the poll, contending that the joint petition Atiku and the PDP entered against him was incompetent as it was based on conjectures.

Insisting that reliefs the petitioners are seeking from the tribunal were “vague, nebulous and lacking in specificity”, argued that most of the issues and grounds of the petition were not only “mutually exclusive”, but also outside the jurisdiction of the tribunal.

He contended that by virtue of section 31(5) and (6) of the Electoral Act, 2010, as amended, only the Federal High Court or High Court of a State has jurisdiction to adjudicate on some of the issues, among which included the allegation that he was bereft of the requisite educational qualification.

Buhari told the tribunal that contrary to Atiku’s allegation, that he submitted false academic qualifications in the Form CF001 he used to secure clearance from the Independent National Electoral Commission (INEC), he said he was at the time of the election, “eminently qualified to contest the election, having not only the minimum qualification of reading up to secondary school level, but rose to the peak of his career as a General in the Nigerian Army with cognate experience and training.

“All information in the affidavit submitted by the respondent for the purpose of his election to the office of President of the Federal Republic of Nigeria is true and correct, to the best of his information and knowledge”, he added.

Consequently, he maintained that all paragraphs of the petition relating to or touching on his alleged non possession of requisite educational qualification, “are liable to be struck out”.

More so, he argued that the alternative relief in the petition seeking a fresh election, was inconsistent with relief 409(a), (b), (c), (d) and (e) of the same petition, saying, “thus, all the reliefs in the petition are liable to be struck out.

“The entire reliefs are not justiciable, as the petitioners who claim to have scored majority of lawful votes in substantial number of States, are also questioning their own return in those States; the petitioners cannot act as petitioners and respondents in the same petition.

“By the petitioners’ pleadings, they claim to have majority of votes cast at the election in Rivers State, Bayelsa State, Akwa lbom State. Enugu State. Ebonyi State. Abin State Imo State. Delta State. Cross River State, Edo State, Anambra State, 0ndo State, Oyo State, Benue State, Plateau State, Adamawa State, Taraba State, and the Federal Capital Territory, Abuja; yet, they seek an alternative and incongruous relief that the presidential election of 23rd February, 2019, be nullified and a fresh election ordered, without first praying for the nullification of election in the States where they claim to have won.”

Similarly, he argued that all portions of the petition relating to the use of Card Reader Device are liable to be struck out, same being incompetent and not rooted in any existing legislation.

He equally argued that every aspect of the petition grounded on or relating to electronic data purportedly retrieved or downloaded from INEC’s server, are also liable to be struck out, “same being incompetent and not rooted in any existing legislation”.

“That there were no incidences of corrupt practices at the election of 23rd February, 20l9, as alleged by the Petitioners; and that the declaration and return of the respondent President of the Federal Republic of Nigeria is valid and in compliance with the provisions of the Constitution, the Electoral Act, and all other Laws, Rules, Guidelines and Regulations, regulating the election.

“That the election of the respondent as the elected President of the Federal Republic of Nigeria is valid and was conducted in substantial compliance with the provisions of the Electoral Act.

Buhari’s objection was filed through his team of lawyers led by Chief Wole Olanipekun (SAN).