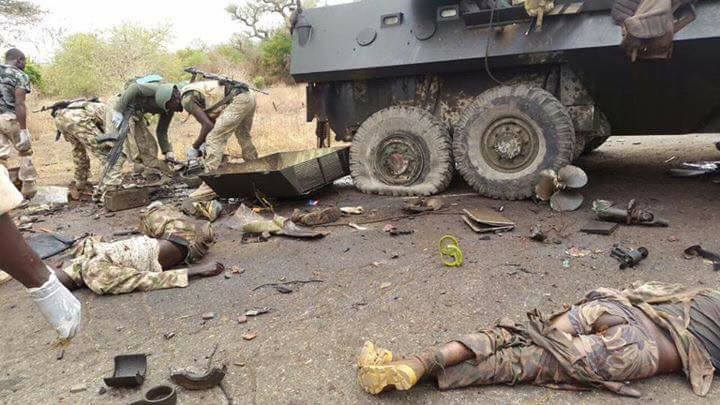 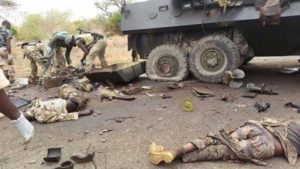 The corpses of dozens of soldiers and civilian Joint Task force (JTF) members killed by Boko Haram in Metele, Borno State, have still not been evacuated, SaharaNews has learnt.

More than 120 soldiers, including five officers, were killed and about 200 others are still missing after Boko Haram insurgents attacked a battalion station in Metele, Mobar Local Government Area, on the outskirts of Lake Chad Basin. 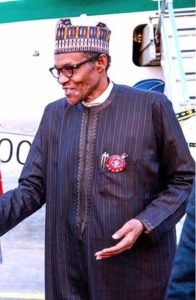 Troops sent to evacuate the dead soldiers two days later were also attacked. According to a soldier who escaped from the follow-up attack, the evacuation team suffered high casualty as they fled, abandoning their operational vehicles at Metele then trekking 50 kilometers before getting to cross Kauwa, in Kukawa Local Government Area.

“It is devastating. More than 120 killed, including civilian JTF members who used to assist our men,” he told SaharaNews.

“We have recovered close to 120 corpses. The terrorists came in large numbers to attacks them from every angle. They tactically backed out; many are yet to return from the troops who went on the evacuation mission.


“The corpses of both soldiers and civilians JTF are yet to be evacuated. We can’t ascertain the numbers but certainly up to a battalion, which comprises hundreds soldiers and also with civilian JTF, the death toll might be higher than a hundred. We are waiting for more information from those who escaped. But it is a tragedy for the entire Nigerian military, not just the Army.”

As a consequence of the tragedy, President Muhammadu Buhari is set to visit Borno, having cancelled a casual leave he was supposed to embark on from November 27 till December 2.