JUST IN: Ohanaeze Shamelessly Apologizes To Buhari Over…

JUST IN: Corruption has become an official policy under PMB – Atiku. 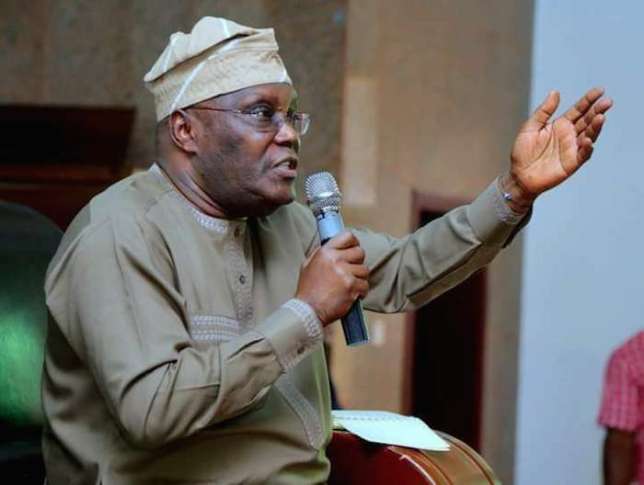 Atiku said he was taken aback last when the sacked Secretary to the Government of the Federation (SGF), Mr. David Babachir Lawal, turned up at the Presidential Villa last Thursday, where he was received with pomp and pageantry.

Lawal was sacked in 2016 for diverting to personal use, funds meant for the feeding and rehabilitation of Internally Displaced Persons (IDPs) in Northeast.

The sacked SGF had on Thursday attended a political event, tagged: ‘Together Nigeria’, which was organised by the Buhari Support Organisation (BSO).

A statement yesterday by Atiku’s Media Adviser Paul Ibe said it’s a very sad day for Nigeria, when the President honoured a man proven beyond all reasonable doubts to have soiled his hands with money meant for starving IDPs.

“These are the actions that feed the perceptions that have made Nigeria turn in its worst ever Corruption Perception Index rating by Transparency International, where we went back 12 steps in 2018’s rankings, moving from 136 under President Jonathan to 148 today”, the statement said.

Quoting the Transparency International, Atiku said Nigeria is more corrupt today than ever before.

He raised a number of questions for the administration to answer: “Who reinstated and double promoted Maina? Who owns the Ikoyi Apartment $42 million? What has happened to Aisha Buhari’s ADC, who looted N2.5 billion?

“Why was the $25 billion Nigerian National Petroleum Corporation (NNPC) contracts awarded without due process investigated? Why haven’t those beyond Buhari’s padded budget scandals been sacked or charged to court?

“When will Babachir Lawal be charged? How come fuel subsidy has doubled even when petrol price has doubled? Why did President Buhari lift the suspension of the corrupt National Health Insurance Scheme (NHIS) boss, Usman Yusuf, before public pressure forced him to suspend him? Why has he not been charged?

“In May, Transparency International warned that Buhari had increased Security Vote by 600 per cent, yet our soldiers have no weapons and are killed by terrorists. Where is the money going?

“In February, Buhari withdrew $1 billion from the Excess Crude Account to ostensibly fund the war on terror, yet the Chief of Army Staff said after Metele that they have no weapons. Where did that money go?”