Nigeria is not failing because of “global”… 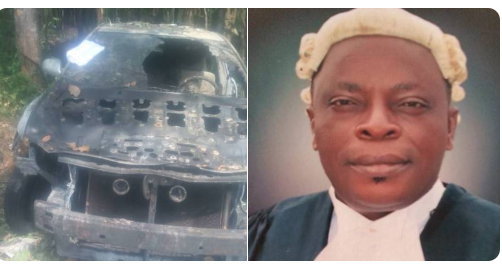 SaharaReporters reliably learnt that on Friday, the lawmaker’s driver, simply identified as Rex, conveyed the lawmaker’s children from Oleh, Isoko South LGA where they went for Christmas celebration, to Asaba. On his way back to Oleh at about 5pm, he noticed that a Corolla car was trailing him.

Speaking with our correspondent via telephone, the lawmaker’s driver said: “My boss asked me to carry his children from Oleh back to Asaba since the Christmas celebration was over. On my way back, I noticed that a Corolla car with two unidentified hefty men was trailing me from Ogwashu-Uku.

“At this point, I had to accelerate. However, the car that was following ours doubled-crossed us at Ossisa town and one of the men jumped out from the car, and entered the passenger’s seat of the car I was driving. He brought out a pistol and asked me questions such as ‘where is your boss?’; ‘where are his children?’ All this time, a gun was pointed at my head. I was then ordered to drive straight to Kwale and from there, I was ordered to face Ogume road.

“I had no option than to obey and I drove into Ogume road. When we got to a very lonely forest, I was again ordered to drive inside the forest. Before I could say Jack Robinson, I was shot. As I was shot, I found a way to escape into the forest. As I was inside the forest, they started shooting sporadically and telling me to come out from the forest or they would burn my car. Before the Police arrived the scene, they had set the car ablaze.”

According to Rex, the target was his boss, who was not in the vehicle at the time of the incident.

“Who knows if his children would have also been assassinated by the gunmen if they were still in the vehicle. The incident is politically motivated; that I can tell. But I thank God that their plans failed,” he added.

When contacted, Okperi, a lawyer, confirmed the incident and accused the Peoples Democratic Party (PDP) and its candidate, the House of Representatives minority leader and member representing Isoko federal constituency, Leo Ogor of being behind the attack.

Meanwhile, the matter has been reported at the Abbi Police Station for further investigation.

JUST IN: President Buhari is not my uncle, he is not my cousin – Amina Zakari

TRENDING: Qualities That Distinguished Mazi Nnamdi Kanu As The Most Exceptional Freedom Fighter In Year 2018