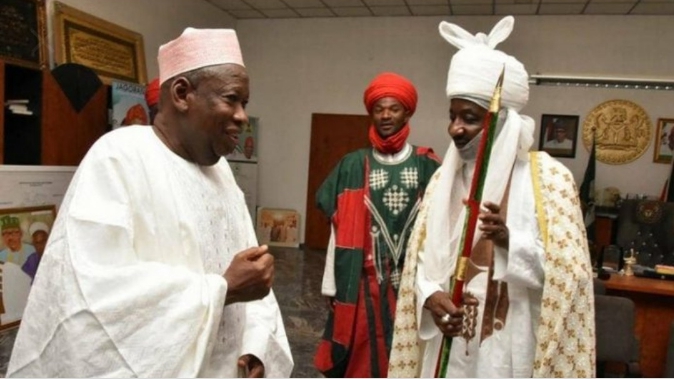 SAHARANEWS – Emir Muhammad Sanusi II has been advised to resign honourably and save the throne from partisanship and ridicule.

This was contained in a communique signed by the National Coordinator of Northern Coalition for Democracy and Progress (NCDP), Dr. Abba Gwarzo.

The communique also stated the position of the group on restructuring and insecurity.

The communique read: “Delegates of the Northern Coalition for Democracy and Progress (NADP) just concluded an emergency meeting today 23rd of May to deliberate on pressing issues facing the North.

“Delegates came from the 18 out of the 19 states that make up the North West, North East and North Central States. The coordinator from Plateau State sent his apologies.

“Two issues that were prominent on the agenda are the issues of persistent insecurity in several states and the Emirate controversy in Kano State.

“On the issue of security, the group called on the federal government to set up a special security squad drawn from all security agencies to parade all the states where killings and kidnapping have been persistent including Zamfara, Kaduna and Benue states.

“On the installation of four new emirs in Kano State, the group commended the Kano State government, Dr. Abdulahi Umar Ganduje for the courage to lead the reform that will bring development closer to the people. It will be recalled that the Governor recently installed four new first-class Emirs of Bichi, Rano, Karaye and Gaya following a new law passed by the State House of Assembly.

“The coalition traced the history of the class struggle between the talakawas and the aristocrats through the 1950 Sawaba Declaration and described the development in Kano State as a path towards ending the oppression of the talakawas by the privileged aristocracy.

“The coalition observed that the new restructuring and decentralization policy will foster social cohesion and prevent unnecessary conflict in the state. The coalition called on all progressive elements in the Northern region to unite in solidarity with what delegates described as a pro-people policy and condemned the alleged moves the Emir of Kano to fan embers of conflict and stoke needless fires that can lead to a breakdown of law and order.

“The coalition observed that the Emir Sanusi Lamido Sanusi has a controversial history that is laced with scandals unworthy of an occupant of such an exalted and respected office. Such scandals, they insist, have become a great source of worry especially among the Ulamas(scholars) as the Emir is supposed to lead prayers during important religious festivals.

“It was recently reported that the state anti-corruption agency invited officials of the Emirate to offer some explanations about spending in the Emirate between 2013 and 2019. Many delegates spoke on the need for the Emir of Kano to consider resigning voluntarily to save his throne from ridicule.

“Furthermore, the coalition frowned on the unguarded public utterances from Emir Sanusi has continued to cast an image of partisanship that has affected the expected neutrality of traditional institutions. Commenting on the issue, a prominent elder statesman in the State, Alhaji Tanko Yakassi had cautioned traditional rulers like Sanusi to learn to respect and subject themselves to political authorities. In addition, from the ‘nothing special’ comment Governor Shetima of Bornu State, it is a clear endorsement of the decentralization exercise.

“The coalition hereby appeals to the residents of Kano State to remain calm and go about their normal businesses with civility, respect of constituted authority without allowing themselves to be used as tools in the hands of disgruntled political entrepreneurs and unpatriotic elements who are determined to foment trouble