BREAKING NEWS #In 2023, We shall emerge and never to return… 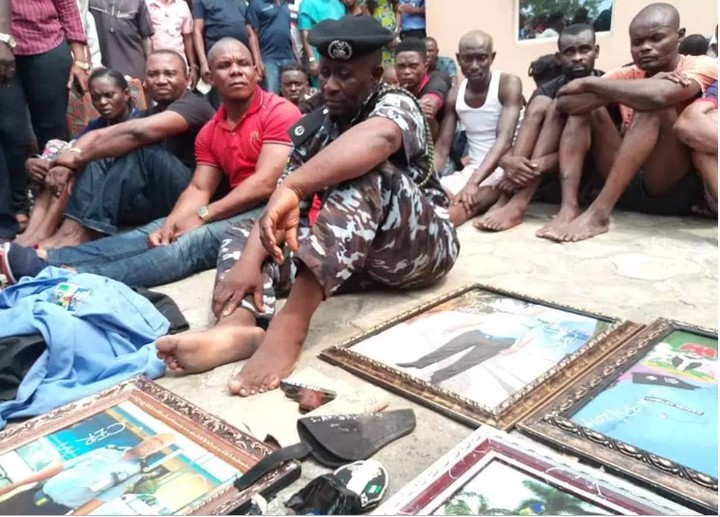 Kingsley Udoyen of 3, Stadium Road, Abak, was arrested for impersonating a Senior Police Officer of the rank of Assistant Commissioner of Police (ACP), a position he used to defraud and threaten unsuspecting members of the public.

Authorities of the Akwa Ibom Police Command have paraded one Kingsley Udoyen, for impersonating an Assistant Commissioner of Police.

He was paraded alongside 213 other suspects on Thursday. The suspects have been charged with various offenses ranging from murder to kidnapping, child stealing, defilement and armed robbery. The offences took place in January 2019.

Briefing newsmen on the arrests made so for, Musa Kimo, the state Commissioner of Police, said the impersonator used the position to defraud and threaten unsuspecting members of the public.

ALSO READ:  Why Nigeria Has Been Backward – Ex-President Jonathan

According to Kimo, Kingsley Udoyen of 3, Stadium Road, Abak, was arrested on January 2, 2019 for impersonating a Senior Police Officer of the rank of Assistant Commissioner of Police (ACP), a position he has used to defraud and threaten unsuspecting members of the public.

“A search in his house led to the recovery of one English pistol without magazine and ammunition, portraits of the Chief Superintendent of Police (CSP) and Assistant Commissioner of Police (ACP), three pairs of uniforms, Police belt, fake Police ID card, and other documents from the suspect,” Kimo added.

Also, a total of 213 suspects were arrested during the period under review; 111 were charged to court. While some are undergoing investigation, those not culpable were released. The command secured 18 convictions. The suspects arrested committed offences ranging from murder, kidnapping, child stealing, defilement, stealing, armed robbery.

ALSO READ:  BREAKING: Be At Alart, Those Flooding South From The North Are Not Almajirai — Yakassai Warns

The command also arrested some men for defiling minors. Joseph Effiong (aged 29) from Ikono Local Government Area and a security man at Royal City Central Chapel Church, Uyo, was accused of luring lured a four-year-old to an uncompleted building and defiling her on January 13, 2019. Joseph Sunday Essien of Ifa Ikot Obong was accused of defiling his 13-year-old step-daughter. Similarly, on January 13, 2019, one Edet Inyang Edem was arrested for defiling a 10-year-old and abandoning the victim at Use Offot Market Squad in Uyo.

Martins Okon Asuquo and Iboro Edet Etim, a self-confessed cultist of Red Skin Confraternity, was accused of robbing one Josephine Nkweke of Ekpene Ukim village in Uran LGA in her provision store on January 14, 2019, while Odudu Emem Hanson was arrested for robbing one Bright Uffi Okpoyo of No.1 Ebet Aya Street and collecting cash, phones, and other valuables on January 20, 2019.