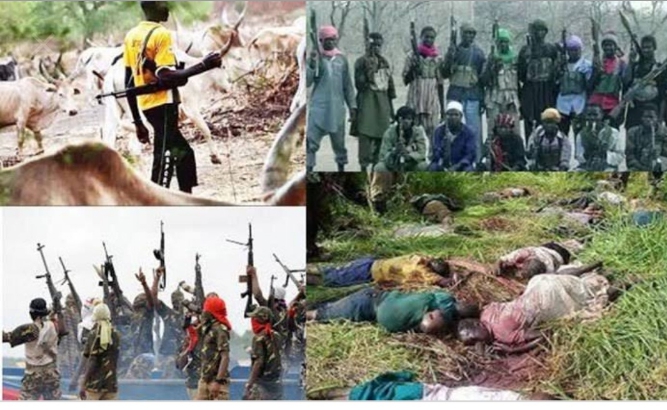 SAHARANEWS – In the wake of these constant killings and genocide perpetrated on the citizens of the Christian communities in the North, in the name of Sharia or Islamic state by BokoHaram and the Fulani herdsmen, a question keeps erupting; why has none of the northern leaders been attacked, not even their homes or their convoys, Not even their streets. Even their cattles are not attacked. Yet human lives are cut short on daily basis and no arrest not even a proscription from the Judiciary.

It’s no longer a news that the northern Political leadership is a sponsor of the islamic Terrorists militia massacring and subjecting the Christian’s of the north to agony and a possible extinction or the executive.

It’s of common knowledge to every human of sanity that despite the incessant killings and genocide perpetrated on the Christian minority by the Islamic Terrorists none of the Islamic leadership have condemned them or supported the families of the affected indigenous people.

Sambisa which we were told is a forest is not necessary a forest but a desert with distant trees and shrubs. It still baffles me why the desert is not yet converted to a cattle colony and the islamic Terrorists or militia in BokoHaram and FULANI herdsmen are still ravaging the whole place and not a single arrest. Rather they use the Media to confuse and deceive the people by tagging known terrorists kidnapping and killing people as bandits.

The police claims to be helpless, while the army claims to be out armored. Imagine? Yet the attorney general, the Police Inspector, the chief of Army staff and the commander in chief of the armed forces still keep their positions and the Nigerian intellectuals are busy vying for Political positions, amid the terror on her citizens.
Worse of all is the compliant nature of the youthful Nigerian citizens who are busy killing themselves to garner crumbs from these Political tyrants to re-elect them to power. The government is also ready to pay bandits billions as to stop terrorizing people. A move we all know will get the terrorists more sophistication in their game of terror.

ALSO READ:  Ebonyi will never be part of Biafra, we are not Biafra — Umahi

It’s a wake up call to every being of sanity, the Church, every organization, society and family to educate and stand against this fulanized Islamic terrorists and tyrants within the corridors of power. It’s time to set ablaze the wools of fear and timidity and have a collective fighting front to demand for freedom and preserve the future.

Join IPOB the only legal and vibrant determined freedom fighting group ever to grace this planet.
Together we can preserve the future, grow our economy as free people independent of imperialism and subjectivity. Biafra is the ultimate answer.