OPINION: The CJN’s Removal: The Lamps Are Going Out All Over…

Zamfara No-fly Zone: We Suspect Helicopters Are Used To Take…

JUST IN: Freezing of Obi’s account,a move by the FG to frustrate opposition – Group 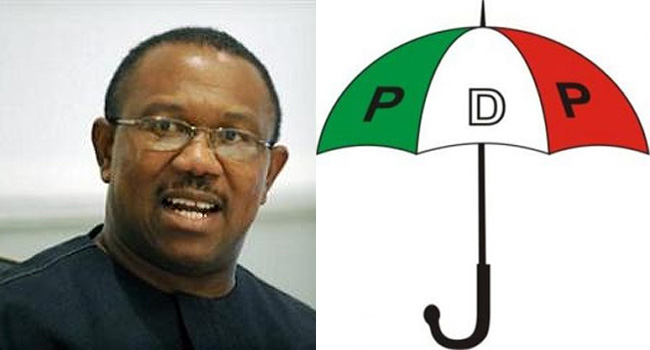 Abakaliki—The leadership of Southeast Mandate for Atiku/Obi Movement, yesterday described the alleged freezing of Mr. Peter Obi’s account by the Economic and Financial Crimes Commission, EFCC, as a desperate move by the APC-led government to cling to power.

They further condemned the action of the EFCC, adding that the emergence of Atiku/Obi for the 2019 presidential election had thrown President Muhammed Buhari-led Federal Government into frustration.

In a statement issued in Abakaliki by the national co-ordinator of the Igbo grassroot political movement for support, campaigns and installation of Atiku Abubakar and Mr Peter Obi of PDP as President and Vice President in 2019, Comrade Timothy Nwankwo, the group stressed that the development would never dampen the spirit of Mr. Peter Obi whose credibility remained an epitome for politicians to emulate in the country.

ALSO READ:  EXPOSED:Police, DSS Should Have Waited For Igboho To Meet With Yoruba Elders And Arrested Us Together – Pa Adebanjo

Grand corruption problem of Nigeria – Osinbajo It stated: “The people of Nigeria know Mr Peter Obi as a foremost unblemished and uncorrupted political leader in Nigeria.“The jittery and frustrated subtle move of APC-led Federal Government to intimidate and dampen the courageous spirit of Mr Peter Obi will never achieve any positive result because Obi is not like Bola Tinubu, Chibuike Amaechi, Adams Oshiomhole or Nasir El Rufai. “South East Mandate for Atiku/Obi Movement warn EFCC to immediately unfreeze the bank accounts of Mr Peter Obi or face unprecedented and massive protest against them.

In a statement by its’ Spokesman, Chief T.E. Ezeoke, the Peter Obi Support Network noted that “this legislative action has become imperative as the President’s decision is a calculated attempt to hold the nation to ransom, inject crisis into the electoral process and ultimately scuttle the conduct of the 2019 general elections, seeing that there is no way he can win in a free and fair contest.”

The group also described the various reasons that the President gave for declining his assent as baseless. -SaharaNews.

BUHARI BODY DOUBLE: vote for the one who can not forget his language suddenly – IBB