JUST IN: Gov Okorocha Under Fire For Alleged Looting Of…

JUST IN: “Give Me Grazing Routes For Fulani And Herdsmen crises will STOP” – Buhari Tells Nigerians 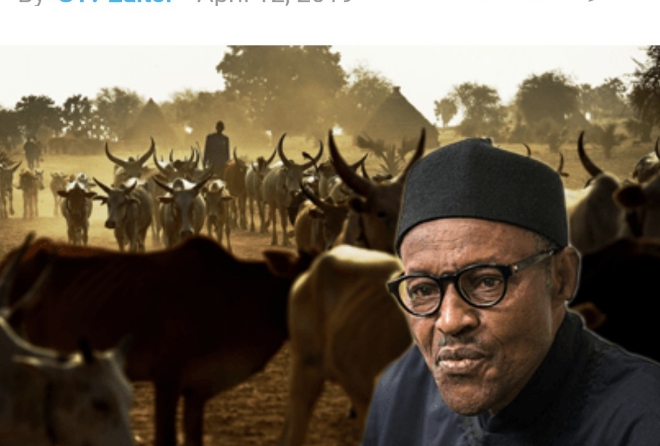 SAHARANEWS – President Muhammadu Buhari believes the re-establishment of grazing routes to enable herdsmen march their cattle unhindered across the nation will be pivotal to putting an end to the conflict between herders and farmers, especially in the Middle Belt region.

The struggle for access and control of lands over which roaming herdsmen graze their cattle has led to conflict with local farmers all over the country, resulting in the death of hundreds with herders blamed for a majority of the attacks.

Armed conflicts between both sides have also been coloured by ethnic and religious sentiments that have worsened the problem with the herders being mostly Muslim Fulani and farmers being mostly in rural Christian populations. Buhari being a Muslim Fulani man himself has also added a political edge to the crisis as he’s been constantly accused of shielding his kinsmen.

However, while speaking during a town hall meeting with the Nigerian community in Dubai on Tuesday, April 9, 2019, the president said Nigerian herdsmen are known to be peaceful and don’t fit the image of the AK-47-wielding marauders who have been accused of attacking communities.

ALSO READ:  Mike Bamiloye narrates how his wife supported him with her NYSC allowance

The 76-year-old, who won re-election in February, said the erasure of grazing routes that existed in the past has contributed greatly to the problem and can be solved by bringing them back.

He said, “But those of you who are neighbours to cattle rearers, Nigerian cattle herders use to carry only sticks and their machetes to cut foliage for the cattle. But these are cattle herders with weapons like AK-47.

“But the problem is that you can hardly identify the difference between cattle herders from Mali, Burkina Faso, Niger, Nigeria, Chad, Cameroon and other cattle herders. They look the same but I was accused of not doing anything about those operating locally but I took the governor (Benue’s Samuel Ortom) on this and this is one of the reasons he left our party for another party.

“Because I told him the cattle herders and settlers problem in Nigeria is older than myself not to talk of him and at first republic, there were cattle routes, they put infrastructures and even veterinary.

“But the so-called politicians because they are so much in a hurry to make money they acquire some of these lands and turned them into their private farms.

“So, if you are a cattle herder or you know about cattle, like myself, the herders now pass through anybody’s land to find water for their cattle to drink.

“I told Audu Ogbeh, the Minister of Agriculture, to look at the gazette of the first republic to get the cattle routes and get the grazing routes and re-establish them so that we can reduce this incidence. Some of you here know the efforts we are making.”

Despite Buhari’s latest public admission about how he plans to solve the crisis, last year, his government presented a National Livestock Transformation Plan, a N179 billion 10-year initiative that championed ranching as the way forward for cattle rearing in the country.

ALSO READ:  (VIDEO) Heavy Tension As Yorubas Also Stage Protest Against Buhari In South Africa, calling On Him To Obey The Rule Of Law And Free Sowore

The plan, presented in June 2018, recommends that cattle herders are expected to be registered and recognised with cooperatives for the purpose of the ranching scheme.

These cooperatives will then be able to get rental agreements for land from state governments and also benefit from ranch resources on several terms including loans, grants, and subsidies.

The funding of the plan from the federal government and state governments is expected to last for the first three years in the pilot phase for a total of N70 billion while private sector interests and investment between the third and tenth year is expected to be in excess of N100 billion.

While updates on the plan have been shrouded in mystery for months, the Minister of Agriculture and Rural Development, Audu Ogbeh, announced in December that it will be implemented soon.

BREAKING: At Least 10 Burnt Beyond Recognition In Gombe As Petrol Tanker Collides With Truck