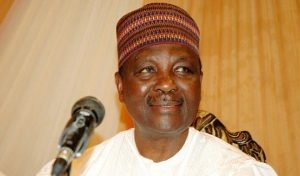 SAHARANEWS – A former Nigerian military Head of State, General Yakubu Gowon, has described as untrue rumour that he slumped in Delta State on Friday, May 3 as reported by some newspapers.

Rumour that Gowon, now 85, slumped during the funeral ceremonies of former Military Governor of defunct Midwest Region, late Major General David Ejoor went viral in the media for some days thereby causing stir across the land.

However, General Gowon described the news as sensational during the thanksgiving service for the 32nd annual Fresh Fire Convention of Gethsemane Prayer Ministries (GPMI) with the theme ‘Jesus: Access to Greater Glory’ and dedication of its Bethel Prayer Suites, Retreat and Conference Centre, at The Chapel of Light, Eleyele, Ibadan.

ALSO READ:  PDP, Others Issues Strong Warning To FG, Demands The Whereabout Of Chinese Doctors And Their Real Mission In Nigeria

General Gowon, who is the national chairman of Nigeria Prays, was represented at the occasion by the Secretary of the Christian group, Evangelist Austen Kemie. He lamented that some sections of the media sold itself to falsehood.

He said: “I am representing General Gowon at this gathering. He said he did not slump as reported in the news few days ago. Though he is 85 years old, he is still waxing stronger and stronger. But, the false news went all over the world.

“He (Gowon) said calls were coming to him from Canada, America, United Kingdom and other countries of the world on the news that he slumped. He asked me when we spoke if I could see how strong he was. He said he could walk 10 miles.”

In his vote of thanks at the end of the convention and dedication service, the President, GPMI, Reverend Moses Aransiola, expressed appreciation to the former head of state, the executive arm of Nigeria Prays and other men of God, who graced the occasion, for their prayers for the nation and for their gestures to his ministries.

ALSO READ:  Drug lord Abba Kyari begs court not to transfer him and others to prison

Aransiola, who called for concerted efforts of all towards nation-building and the work of God, said: “I want all the people to know that God will continue to honour the prayers of his people and bless the work of their hands.”

BREAKING: Saraki Reacts To The Seizure Of His Houses By EFCC

BREAKING: I Overrated APC, I Wish I Had Listened To Nnamdi Kanu, Imagine Oshiomhole Asking Security To Send me Out Of His Office, But I Know What To Do – Gov Rochas (VIDEO)