BREAKING: Many killed as Fulani herdsmen in military uniform… 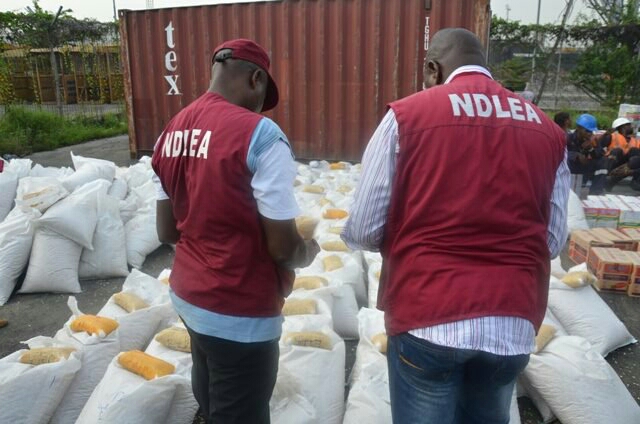 SAHARANEWS – The Ondo State Command of the National Drug Law Enforcement Agency, NDLEA, has confirmed the seizure of 851.027 kilogrammes of a psychotropic substances including: Tramadol and Codeine syrup.

The state commander of the agency, Haruna Gagara, who disclosed this to newsmen in Akure, the state capital, also revealed that the command confiscated 30,618 tonnes of cannabis sativa, with five hectares of Indian Hemp farm destroyed.

Gagara added that three single barrel guns and one pump action rifle were recovered during the raid where the harmful drugs were uncovered during the phase 1 of its “Operation Ijo Oloogbo” (Cat Dance) in the state.

“During the operation, “psychotropic substances such as Tramadol and 93,480 tablets and syrup containing codeine were seized as well as 8,630 tablets of Rophynol, 80,000 tablets of Benzhexol-5 and 4,800 bottles of Panpedeen cough syrup with codeine.

“At Ipele forest in Owo Local Government Area of the state, which is the location of Operation Ijo Oloogbo, the exercise led to the arrest of 12 male suspects and seizure of 54 bags of Cannabis Sativa, weighing 627.5 kilogrammes (29.04 tonnes) and 12 bags of Cannabis sativa seeds, due to inadequate logistics for the evacuation.”

The NDLEA boss added ahead of the 2019 general elections, the command is determined to rid every nook and cranny of the state of hard drugs by chasing drug barons out of the state.

“It is a crucial task that must be done in order to create a safe and violence free environment for the 2019 general elections,” he said.

Gagara further stated that as part of efforts aimed at creating a drug-free society, a total of five suspects have been referred for counselling from the agency’s Supply Reduction Unit, SRU.