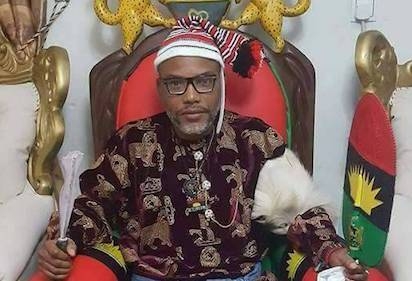 SAHARANEWS – The leader of the proscribed Indigenous People of Biafra, IPOB, Mazi Nnamdi Kanu, Tuesday said that he would remain grateful to all his sureties, noting that God would bless them for standing by him in his moment of despair.

Recall that the Senator representing Abia-South Senatorial District, Enyinnaya Abaribe and other sureties bailed Kanu with a whooping sum of N100million naira each.

Other conditions given to Kanu before his bail include:

— Mr. Kanu must not hold rallies.

— He must not grant interviews.

— He must provide three sureties in the sum of N100 million each.

— One of the sureties must be a senior highly placed person of Igbo extraction such as a senator.

— The second surety must be a highly respected Jewish leader since Mr. Kanu said his religion is Judaism

— The IPOB leader must deposit his Nigerian passport

— He must also deposit his British passport with the court

— He must provide the court with reports on the progress of his health and treatment on a monthly basis.

— The order for him to deposit his Nigerian and British passports also mean he cannot travel out of the country.

However, report of the alleged invasion of his house by the Nigerian Army emerged as Kanu reportedly stormed Israel from which he went to UK.

After some months of his disappearance, Kanu spoke and assured his members that he is alive.

In view of the above therefore, Kanu, Tuesday in a radio broadcast, ‘Radio Biafra’, averred, “I remain eternally grateful to my sureties for standing by me all through my travails, trials and tribulations.

“It smacks of judicial persecution for Justice Binta Nyako handling my case to claim that my sureties had withdrawn their surety.

“Justice Binta Nyako’s bench warrant against me makes the judiciary complicit in the persecution of innocent people and IPOB since mid 2015.

“Where a case is for hearing of motion, the trial judge must hear the motion and adjourn for any other process. On no account should he hear a motion and hear the merits of the matter, not to talk about delivering judgment. He may consider doing that in the very rare circumstance of consent by parties.

Biafra: Abaribe begs A-Court to free him as Kanu’s surety

“When a matter has been adjourned for a particular purpose, it is my view that the business of the court on the day the matter is adjourned is the purpose for which it was adjourned.

” It is expected that parties have come prepared for that purpose for which the matter was adjourned. If it is expedient to change the purpose, it cannot be done by the court suo motu(on its own) as the parties must agree.”