Nnamdi Kanu Said it, Where Exactly is Buhari In The UK And… 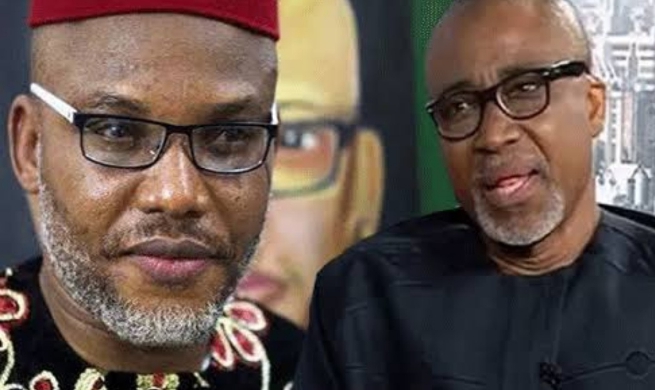 Ejiofor, in a press statement made available to SaharaNews , rather blamed the inability of the sureties to produce Kanu on the invasion of his (Kanu’s) house by military personnel.

He cried that reports in the media and social media quoting Justice Nyako as saying that her withdrawal of Kanu’s bail was because his sureties had withdrawn their suretyship was not true.

“On the matter of revocation of Kanu’s bail and the consequent Order of bench warrant, I, Barrister Aloy Ejimakor, Counsel to one of the sureties and a Special Counsel to Nnamdi Kanu, hereby issue the following this statement.

“The reports in the media quoting Justice Binta Murtala-Nyako as stating (when revoking Nnamdi Kanu’s bail on March 28, 2019) that the ‘three sureties who bailed Kanu had applied to the court to withdraw their suretyship’ is inaccurate.

“I should know because I represent one of the sureties and we never made such application or anything close to it.”

Ejiofor said that on the contrary, the sureties have been fighting to stay on as sureties while pointing to the army’s invasion of Kanu’s home as the sole and proximate reason for their inability to produce Kanu in Court.

He said, “That argument is still pending a hearing in a suretyship proceedings that was adjourned sine die at the time of the entry of the Order of bail revocation and the ensuing bench warrant.

“For the foregoing reasons, we are currently studying the record of proceedings of the said March 28 hearing to see whether it will be necessary for the sureties to file fresh processes to protect the integrity of their suretyship relationship with Nnamdi Kanu, which is still valid and subsisting.”

JUST IN: We Will All Resist Any Attempt by The FG To Re-Arrest Nnamdi Kanu – Ohanaeze Blows Hot, Says Enough Is Enough