BREAKING: Doctors Embarks On Strike Amidst Upsurge Of…

JUST IN: No Amount Of Intimidation Or Proscription Can Stop IMN, Only The Release Of El-Zakzaky Can – Lawyer 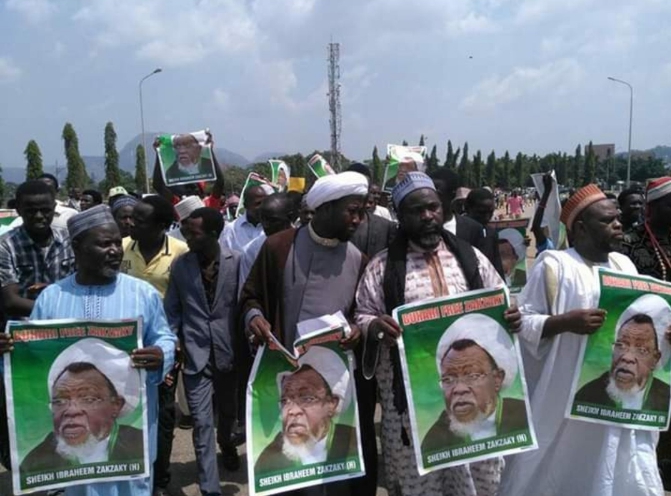 SAHARANEWS This opinion will not delve into the constitutionality of the ex parte order by which people numbering millions are by a stroke of pen levelled terrorists and their group terrorist organisation. What is more important at the moment is that the Federal High Court’s order subsists and the Islamic Movement of Nigeria (IMN) and all its activities anywhere in Nigeria stand proscribed and illegal.

Permit me to begin by reiterating that matters arising from recent FG-IMN engagements are neither sectarian nor regional. They are critical national issues with far-reaching implication requiring the attention of all and sundry.

Unverified statistics has put the number of Shiites in Nigeria at 3 million with a good majority of them identifying with the Islamic Movement of Nigeria (IMN) and its leader Sheikh Ibrahim El-Zakzaky as their source of spiritual replenishment. This is not inclusive of several-million other Nigerians not actively identifying with but sympathizing with the group and supporting it financially, technically or morally.

Perhaps not unconnected with the group’s regimental mindset and attitude towards constituted authority, the government even before the recent judicial banning of the activities of IMN, has always been unusually aggressive towards the group. Several national and international human right groups and advocates have repeatedly decried Nigeria’s reckless violation of the fundamental rights of members the group and have made stern calls for a good shift.

Most prominent in the series of government’s crackdown on the group was the December 2015 military invasion of the group’s headquarters in which hundreds of defenceless members of the group were killed, their sacred relics and graves desecrated and their spiritual leader brutalized, detained and refused bail after 3 court orders. These actions and inactions have widely been condemned as irreciprocal, unlawful, excessive and dangerous; and the IMN as it exists in Nigeria today is already suffocated and pushed to the brink. The members of the group probably only find solace in the remnants of their freedom to associate freely and perform their religious activities considered by the government as non-obstructive.

Now that the courts being Nigeria’s most accommodative institutions – in that even celebrated armed robbers and kidnappers are considered innocent until proven guilty – have unilaterally given credence to the already existing FG ban of IMN activities in Nigeria, it is only fair that Nigerians await full-blown government’s onslaught on the movement. This will happen naturally in two ways: physically using barrel of the gun as Nigeria’s ultimate mode of riot suppression, and legally through the instrumentality of laws, policies and regulation.

The direct implication of the gun mode is not worthy of my or anybody’s time and ink. So much water has passed under the bridge since Nigeria sought to forcefully suppress what grew to be Africa’s deadliest beast in 2009. Boko Haram’s terror activities have also secured Nigeria a top spot on the Global Terrorism Index for several years in a row. A word is enough for the wise.

The legal implication of proscribing the IMN is that the group can no longer associate to conduct their routine preaching session in any state of the federation. They will not be allowed their customary processions on notable days like the Quds, Maulud, Ashura etc. They cannot lawfully gather under or identify themselves with IMN any longer without invoking the wrath of law and prosecution. The IMN if it has any, will automatically lose its legal personality and cannot sue or be sued by its own name to get any redress no matter what happen. Courts are legal temples entertaining only legal causes and entities.

The group or any of its identified members cannot receive funds directly or indirectly in any Nigerian financial institution. And because IMN is not only proscribed but also levelled a terrorist group, Nigeria would be expected to take diplomatic steps to intimate the International Community of its decision and to prevent foreign countries, groups and individuals from rendering any form of assistance to the group. Another far-reaching implication of the proscription will be that which forfeits the group’s entire assets and properties- tangible or intangible to the government of the federation.

Nigerian Financial Intelligence Unit (NFIU) will be expected pursuant to its duties under the NFIU Act 2018, to follow suit by sharing intelligence with other FIUs across the world in order to prevent the group from laundering monies or securing dangerous weapons.

The Terrorism Prevention Act 2011 as amended in 2013 further expanded the implication of tagging organisations as ‘terrorist groups’ to include meting out stricter punishment to not only members of the organisation who automatically become terrorists by virtue of their identification with the group, but also to all members of the public upon conviction. This will affect interaction both physically and on the cyberspace. The laws as they stand in Nigeria today, are that anyone who renders any form of support to terrorist organisations like the IMN, be it financial or moral, will be liable on conviction to up to 20 years in prison. See section 5(3) of TPA 2013.

To achieve this end, Nigeria would be expected to gazette the notice of the court order such that any Nigerian found in anyway associating with or dealing with anything IMN, online or offline, could be lawfully prosecuted and punished under the relevant Nigeria laws without the government handing him the defence of ignorance of the law.

Coming this far without more, I suppose the above backdrop paints a clear portrait of a government struggling albeit gauchely to strangulate and estrange a highly spirited, regimented religious group with physical and legal force. And at the risk of sounding pessimistic, I shall have the liberty at this point to say that; it is most unlikely that this pattern of estrangement would take Nigeria to a safe destination. The idea of denying a people right to religion from time immemorial has been vigorously resisted and nobody needs any superpower to tell that the IMN will never simply yield.

It is therefore unthinkable that court order, security agents’ aggression or anything else could halt the IMN from conducting their religious activities. If they can’t do it here, they would elsewhere. In cities or the forest of Sambisa. A better move would therefore have been devising an intelligible way of de-radicalising, empowering and living with these poor Nigerians.

BREAKING: Tension And Uncertainty In The South-East As Herdsmen Attack And killed IPOB Principal Officer In Imo State