‘It Never Moved Me In Any Way’—Governor…

IPOB slams Garba Shehu, insist it is not a terrorist group 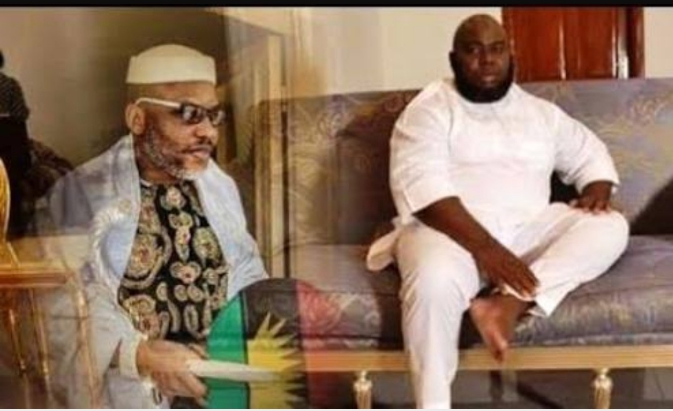 In a statement made available to SaharaNews on Wednesday, the President General, Mazi Okechukwu Isiguzoro, expressed surprise on alleged federal government negotiation with leadership of Miyetti Allah Cattle Breeders Association of Nigeria (MACBAN) to end kidnapping and killings in the country.

Kanu
He said the government should also dialogue with Biafra agitator who it said were not violent like the herdsmen.

The group said: “IPOB should make peace with Asari Dokubo urgently as the rift is threatening the bond and partnership existing between the South East and South/South.

“Since after the war, the two regions had been enjoying the harmonious relationship between them, so we advocate that IPOB should extend hands of friendship to Asari Dokubo, as we will not allow any misunderstanding between Nnamdi Kanu and Asari Dokubo escalate, and IPOB should use the May 30th to mend fence with ex Niger Delta Agitators rather than Sit at home,” the youths said.

They also called on the federal government to negotiate with the proscribed members of IPOB, Movement for Actualisation of Sovereign States of Biafra (MASSOB) and other Biafra agitators to end the Biafra agitation.

The youths noted 30th of this month when the Biafra agitators will be celebrating Biafra day was an opportunity the federal government have to dialogue with the agitators.

“We are surprised on the meeting between Federal Government represented by Minister of Interior Abdul-Rahman Dambazau and the leadership of Miyetti Allah Cattle Breeders Association of Nigeria (MACBAN)where a huge carrot is thrown to the herdsmen group to help stop kidnapping and tackle insecurity and clashes between Herdsmen and farmers.The Federal Government should also extend the same gesture of N100bn to The leadership of Massob and Ipob. What is good for the goose is also good for the gander.

“As Biafrans are celebrating the May 30th Remembrance day, the Federal Government has the opportunity and visible channel to negotiate with the leadership of MASSOB and other Biafra agitators.

“Reaching out to Biafra agitators are imminent to scuttle the mayhem likely to occur over the killings of Igbo’s in the North by Armed herdsmen and bandits.

“It’s on record that about 167 Igbo have fell victims of Armed herdsmen and bandits in North West and East in the last few weeks, tension is building up in the South East ahead of May 30th Biafra remembrance day, Presidency should give Biafrans N100bn to avoid reprisal attacks”.

ATIKU vs BUHARI: Summary Of What Happened At Presidential Election Tribunal On Wednesday