Those insisting on suspended sit-at-home are hoodlums, not…

JUST IN: Okorocha Lands In Court Over Certificate Of Return Saga – See Proceedings 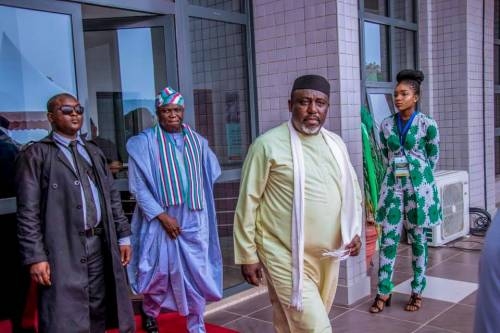 SAHARANEWS – Governor Rochas Okorocha of Imo State has visited the Federal High Court in Abuja following the delay in re-assigning his suit over his Certificate of Return.

Okorocha, in company with some of his aides, arrived at the court around 4:20pm on Tuesday and went into a meeting with the Deputy Registrar, Litigation, of the court. He left the premises of the court roughly one hour after.

The outgoing Governor, who was the candidate of the All Progressives Congress (APC) in the Imo West senatorial zone election, had filed a suit against the Independent National Electoral Commission (INEC), seeking an order of the court compelling the commission to issue him a Certificate of Return on the grounds that he was declared winner of the election by the Returning Officer.

Jones Onyeriri, the candidate of the Peoples Democratic Party (PDP), and Osita Izunaso of the All Progressives Grand Alliance (APGA), had, in separate applications, requested Justice Taiwo to recuse himself from the matter because, according to APGA counsel, Orji Nwafor Orizu, he had “clearly prejudged the substantive issues that will be resolved in this matter and clearly showed he has taken sides with the plaintiff (Okorocha)”.

Before the suit was stalled, four other candidates and political parties in the election including — Nwachukwu Goodluck Clement of KOWA Party, Uche Onyeoma Ibe of Labour Party, Precious Nwadike of the United Progressive Party (UPP) and Izunaso of APGA — had objected to the suit being heard by the court. T

he parties accused Okorocha of holding the Returning Office under duress to declare him winner, adding that the matter could only be handled at the Elections Petitions Tribunal.

JUST IN: Biafra Is Mine, Either You Work With Me Or You Look For Another Name – Asari Dokubo Declares In A New Video, Expresses Displeasure Over Nnamdi Kanu’s Diplomatic Progress – See Video