JUST IN: Onnoghen Appeals Conviction By Tribunal, Lists 16 Reasons Why He Should Be Acquitted 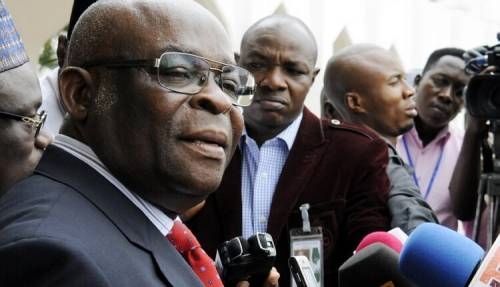 It also said Onnoghen is to forfeit the money in his five bank domiciliary accounts that were not declared to the Nigerian Government because they were acquired illegally, and as well barred him from holding public office for the next 10 years.

However, in a notice of appeal filed at the Registry of the tribunal shortly after the judgment, Onnoghen faulted the judgement on 16 grounds, and urged the Court of Appeal to set it aside.

He asked the Court of Appeal to hold that the CCT lacked the jurisdiction to hear the charge and that the tribunal ought to have recused itself from the trial.

He also prayed the Appeal Court to set aside all the orders made by the tribunal in the judgment, including that of forfeiture of his five domiciliary accounts to the Nigerian government.

ALSO READ:  Biafra: We must never forget our brethren in captivity for our cause — Ojukwu's son

“The lower tribunal erred in law when it refused to recuse itself from the proceedings in view of the open declaration by the Chairman of the tribunal that he is only accountable to the President, who appointed him and nobody else, because he is not a judicial officer and thus, occasioned a grave miscarriage of justice,” he said.

“The lower tribunal erred in law when it held that the appellant confessed to the charges framed by admission and used that as a basis to hold that the appellant did not declare his assets from the year 2005 when he became a justice of the Supreme Court and thus occasioned a grave miscarriage of justice.

“The lower tribunal erred in law when it held that the appellant is guilty of counts 2 – 6 of the charge in view of the fact that the appellant made an admission that he did not declare the Standard Chartered Bank account numbers in the 2014.

“The lower tribunal erred in law when it held that the appellant made false statement by the omission to declare the account numbers in Standard Chartered Bank in 2014 declaration, the same way he did in the 2016 declaration and held counts 2 – 6 to be proved.”

ALSO READ:  #FreeSowore: (VIDEO) We Were Given N1m At Gun Point, Told Not To Protest — Adeyanju

Earlier, Okon Nkanu Efut, Onnoghen’s lead counsel, had reacted to the judgment by branding it “unconstitutional and out of order”.

“The journey has ended today because everything that has a beginning must have an end. So this day, we have heard that the Chief Justice of Nigeria has been convicted and sentenced,” Efut had said.

“So today’s judgement is just a formality and we hold the view that the tribunal has not only breached the constitution of Nigeria, it has breached the fundamental principles of natural justice, equity and good conscience.

“It has not only not been able to pass judgement, it has convicted for an offence that was never charged and this is an erosion of the fundamental principles of our constitution. Until some questions are answered, for instance, why is it that the due course of justice was not allowed to flow? Why was judgement passed on January 23 before today, removing the CJN?

“We hold a view that the tribunal in reversing itself in the case of Ngwuta, has breached the principle that hold us together. This is a sad day in our nation’s democracy and we know that all is not over with this matter. The wheel of justice grinds slowly but surely. This is not a matter that will end here.

BOMBSHELL! Nnamdi Kanu Releases Proofs And Evidences On The True Origin Of Buhari and Atiku