I Will Defeat Atiku, Pastor Bakare Boasts Ahead Of APC…

JUST IN: Osinbajo Is An Embarrassment, Should Be Stripped Of SAN Title – Fayose 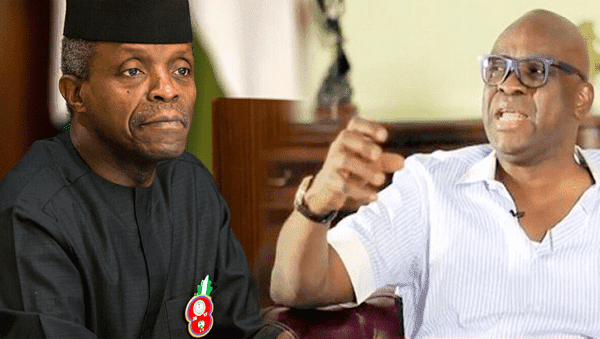 Fayose described Yemi Osinbajo as an embarrassment to the law profession.
He anchored his claim on Osinbajo’s silence over the suspension of the Chief Justice of Nigeria, CJN, Walter Onnoghen.

Fayose urged relevant authority to strip Osinbajo of his SAN title over his alleged silence.

Explaining his reason, the President said he suspended Onnoghen, following an order from the Code of Conduct Tribunal, CCT, asking him to wield the big stick.

However, Fayose claimed that Osinbajo’s desperation to remain the Vice President has allegedly closed his eyes to the illegalities in the current government.

In a tweet, Fayose wrote: “@ProfOsinbajo, a SAN is no doubt an embarrassment to the legal profession. Out of desperation to retain his position as VP, he has shamefully chosen to close his eyes to the illegal suspension of the CJN.

“His likes in this government of tyranny should be stripped of the SAN title.”

Meanwhile, US, EU, UK have urged President Buhari to follow due process in removing the CJN.

UNBELIEVABLE:Ijaw Youths Shock Onnoghen, Back Buhari, Says the Suspension is a Timely Move

ONNOGHEN: Aisha Buhari Call on Nigerian Youths To Rise up Against Tyranny And Injustices in Nigeria