JUST IN: PDP Vehemently Reject Akpabio’s Return Moves, Says “We Don’t Need Your In Our Party” 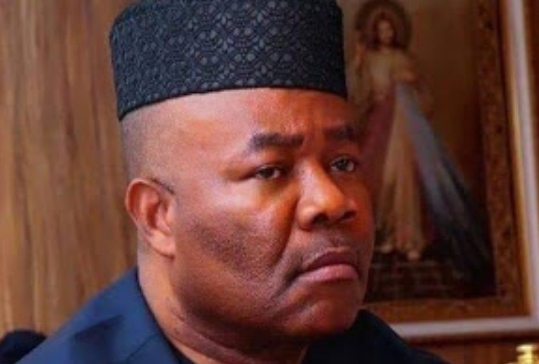 SAHARANEWS – The former Governor of Akwa Ibom, Godswill Akpabio, has been rejected by the State Chapter of the People Democratic Party in the state.

A source from the People Democratic Party in Akwa Ibom State revealed that Godswill Akpabio was rejected by the party after making several attempts to come back to the party.

There was a rumour that the Senate former majority leader planning to return to the People Democratic Party after he was defeated in the last general election.

ALSO READ:  2023 will amount to nothing. Those who so much trusted in it will be disappointed

Reacting to the report, the lawmaker insisted that he was comfortable in the fold of the ruling party. Speaking with the Nation, Akpabio also said he bears no grudge or bitterness against those who have betrayed him politically.

“People don’t understand that life is full of ups and downs. Life is not a straight line.

“If it is a straight line, it means you are dead. Even if you have a temporary setback, that shouldn’t make you exude bitterness or hate anybody. “I can’t go back to the PDP.

ALSO READ:  BREAKING: (VIDEO) US Comes Hard On Buhari Led Nigerian Govt On The Violation Of Human Rights And The Rules Of Law, Threatens To Severe Relationship

“Why are you people listening to rumour? Why will I go back to the PDP when I am already getting entrenched in the APC? “I am excited that the President won the election all over the country,” Akpabio said.

JUST IN: Biafra Is Mine, Either You Work With Me Or You Look For Another Name – Asari Dokubo Declares In A New Video, Expresses Displeasure Over Nnamdi Kanu’s Diplomatic Progress – See Video