North celebrates as Buhari return to Abuja from London trip 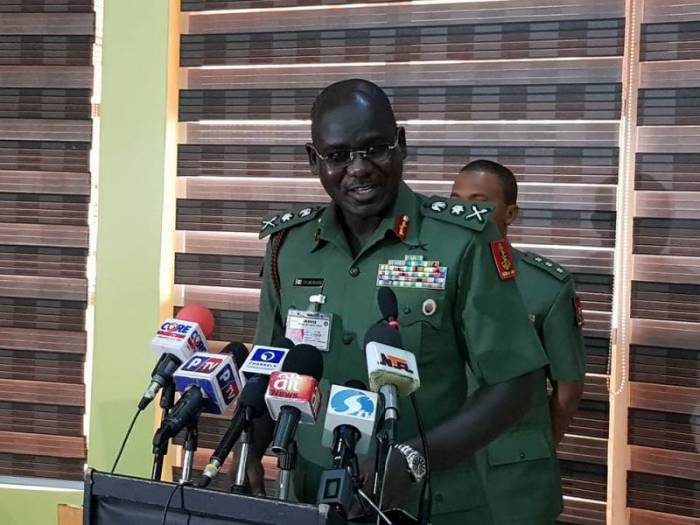 The Chief of Army Staff, Lieutenant General Tukur Buratai, on Monday attributed the escape of the leader of the Indigenous People of Biafra (IPOB) Nnamdi Kanu as one of the major successes of Exercise Egwu Eke II.

The Army Chief who spoke at the flag off of the third edition of the military maneuver Exerciser Egwu Eke III in Lagos said: “One of the important achievement of the Exercise held in 2016 was the escape of Nnamdi Kanu; let him come and face the battle if he wishes.”

General Buratai said if Nnamdi Kanu dared, the python would have swallowed him, warning other criminal elements and those planning to cause trouble in Lagos and Ogun states to stay clear or “the python will swallow them.”

He explained that the objective of the military maneuver was to reinvigorate all existing operations in the country with additional manpower, equipment and resources to address the lingering security problems in the country.

His words: Nigerians should be assured that at the end of the exercise which is also conducted simultaneously by other divisions in the army; the python must have swallowed all the bandits, rustlers, terrorists, kidnappers, robbers and militants in the country. The python will also swallow thugs and other miscreants that may raise their heads to disturb the peace in the country.”

General Buratai warned criminals within Lagos and Ogun states to flee or would be crushed by troops of the Exercise Egwu Eke 111.

“l enjoined Nigerians to be mindful of the fact that this is the only country that we have and all efforts should be focused to save it from the claws of unpatriotic elements fighting to pull the country down. Giving out official information or spreading fake news is inimical to national security.”

General Buratai said that prior to EX EGWU EKE III, the Operation AWATSE had intensified operations to crack down the activities of illegal oil bunkering, pipeline vandalism, kidnapping, armed robbery and cultism among others, adding that the operations conducted against economic sabotage by pipeline vandals and cultists as well as other criminals had achieved commendable successes. He said several vandals had been apprehended while other criminal elements especially cultists were on the run.

General Buratai said the momentum of the Operation Awatse must be sustained, pointing out that the military must continue to display professionalism in the discharge of its constitutional roles while acting in aid to civil authority.

ALSO READ:  BREAKING: Saraki To Be Jailed? - MUST READ

“Do not provide any opportunity for criminal elements to infiltrate your ranks. You must also embark on civil-military relations activities like medical outreach and others.

“Let me use this opportunity to reaffirm the commitment of the Nigerian Army and our mandate in aid to civil authority. Accordingly, EX EGWU EKE III has the mandate to provide adequate protection and security for the good people of Nigeria.

“I am also calling on all law-abiding citizens to provide troops adequate support and cooperation, especially timely information to enable them to accomplish their task. I assure you of adequate logistic and operational support throughout the conduct of this exercise.

“You must deal decisively with the criminals and ensure that the right of law-abiding citizens is protected. I wish you good luck as we commence EX EGWU EKE III in 81 Div AOR and Nigeria.”