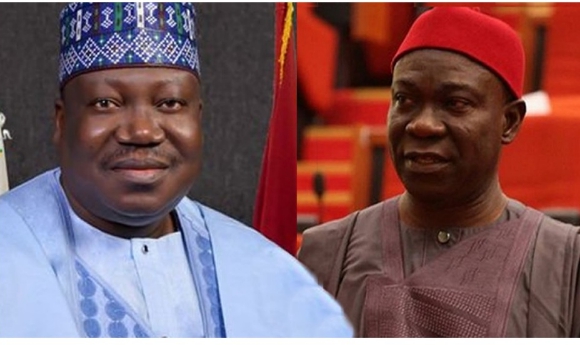 SAHARANEWS – The ruling party, All Progressives Congress (APC) on Saturday in reaction to reports that Lawan begs PDP Senators to vote for hin said it has no problem with Ahmad Lawan, its choice for the position of Senate President, meeting with relevant stakeholders in the People’s Democratic Party (PDP) to canvass for votes.

Despite the threat by Adams Oshiomhole, the National Chairman of APC, that it will have nothing to do with the PDP because the APC is the majority in the upper chamber of the National Assembly, Lawan was reported to have met with some PDP senators and governors, soliciting their support for the number three position.

However, speaking in a chat with newsmen, Lanre Issa-Onilu, APC’s National Publicity Secretary, said the party has no problem with Lawan meeting with relevant stakeholders in the PDP to canvass for votes.

According to him, it won’t be a bad thing if Lawan can also get votes from PDP senators on the day of election.

He said the party is confident that no matter what happens, the interest of the APC is paramount on Lawan’s mind wherever he finds himself.

“Does he not have a right to campaign for the position of Senate Presidency? It doesn’t matter if he reaches out to PDP. If there will be votes from PDP, it is good.

“Part of the reason why he was chosen by the party is because he has the capacity to reach out across the divide.

“So, we don’t have any problem with him relating with anybody. We have absolute confidence that wherever he is, the interest of the party is uppermost on his mind; and that is the most important thing,” he said.

BREAKING: Finally Atiku Open The Can Of Worms, Confirms “Buhari” Is From Sudan – See Pictorial Proofs