BREAKING:We’ll uncover those supporting herdsmen to…

JUST IN: Stop The Attacks In The Name Of Operation Python Dance On Igbo-Biafrans – Afenifere Cautions Buhari 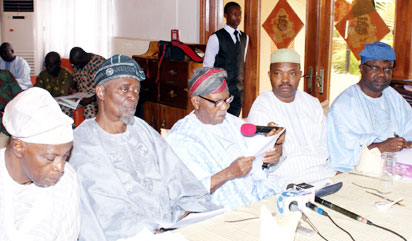 SAHARANEWS – Afenifere, the pan-Yoruba socio-cultural organisation, has cautioned President Muhammadu Buhari against the transfer of civil duties to the military.

It warned the current administration not to commit the same mistake the government of Tafawa Balewa made that led to the 1966 coup.

The group was responding to the deployment of soldiers to the Niger Delta region under an exercise codenamed ‘Operation Crocodile Smile’ not too long ago and the ongoing ‘Operation Python Dance’ in the South-east, as well as the plan to start a similar exercise in the South-west to tackle ‘Badoo boys’.

In a communiqué issued at the end of its monthly meeting at the residence of its leader, Pa Reuben Fasoranti, in Akure, the Ondo State capital on Tuesday, Afenifere warned that the Buhari administration’s strategy of deploying the military across the nation to tackle civil unrest could serve as an invitation to the military to take over the government.

In the communiqué, read by Afenifere publicity secretary, Yinka Odumakin, the group warned that the Nigerian Army should forget coming to the South-west with any exercise as ‘Operation Python Dance’ in the South-East’ and ‘Crocodile Smile’ in the South-south, in the name of tackling ‘Badoo boys’.

“The operation ostensibly, they said, is to confront the badoo menace. We stated that the badoo gang has been decimated by the Nigeria Police and the OPC (Oodua Peoples Congress) in the area where it has occurred and we think if the group resurfaces, it is the duty of the police to deal with it without causing tension, invasion and harassment as it happened in the South-East during ‘Operation Crocodile Dance’.

“We insist that the military has no duty in going after badoo even if it comes back. We want the Federal Government to be careful with the spate at which it deploys solders all over the country. The other day, the Speaker of the House of Representative lamented that 28 out of the 36 states of the country are under one military operation or the other.

“The South-West has been adjudged the most peaceful area of the country. To now bring military here is to say that the entire country is not safe. They are sending a wrong signal to foreign investors and more importantly, the Federal Government should be reminded that before the coup of 1966, this was how the Balewa government started to transfer civil duty to military and the military now said they could take it themselves,” the communiqué read.

The group also reacted to the comments allegedly made by Northern Elders Forum that the region would not easily give up its advantages in Nigeria. It said such comments should not have emanated from sincere Nigerians.