BREAKING: It’s A Shame That After Selling Oil For… 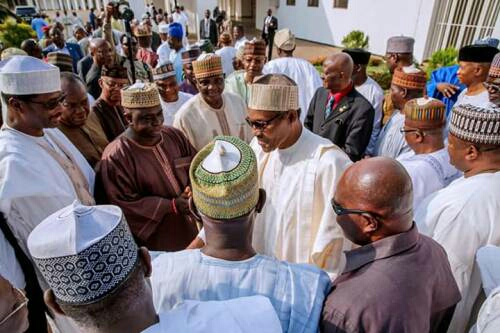 Speaking at the event, Buhari said he would continue to make his objective and vision clear to Nigerians and always do his best for the betterment of the country.

SAHARANEWS – President Muhammadu Buhari says ruling a country like Nigeria is not an easy task, but that he’s not complaining.

He stated this on Monday, when 71 retired military officers endorsed his bid for second term.

Brigadier General Buba Marwa (rtd), the former military administrator of Lagos State, led the officers to meet with Buhari at the Aso Rock villa, on Monday.

Present at the meeting was also the Minister of Police Affairs under former president Goodluck Jonathan, Caleb Olubolade, and former Chief of the Naval Staff, Admiral Jubril Ayinla.

Speaking to state house correspondents after the meeting, Marwa said: “As an officer and a gentleman, his word is his bond. After winning the elections, he brought out simple three-point programme – security, economy and fighting corruption.”

He commended the achievements of the present administration, adding that “the retired military officers with former military governors, retired military officers from the ranks of Brigadier General and their equivalents from other officers are here to tell the President and to tell Nigerians that we are fully behind him in the elections next week and we will do whatever we can within the law to see that he is victorious in the elections.”

Speaking at the event, Buhari said he would continue to make his objective and vision clear to Nigerians and always do his best for the betterment of the country.

He said: “God has made this country great. We have human and material resources, and may God continue to give us the right leaders. My objective is very clear, and I will continue to do my best.

“The higher you go in Nigeria, the hotter it becomes, and not the other way round. But I can’t complain. I tried so hard to be here three times, ending up at the Supreme Court. So, I can’t complain over anything I am going through now.

“I am very grateful that you have claimed me back as one of your own. I was Governor of North-East, which is now six states, Minister of Petroleum for over three years, head of state; I was arrested and detained, but did not lose my rank, because nothing was found against me.”

BREAKING: Former US president To Meet With Atiku and Buhari Today In Nigeria