Nigerian Police And Army Invade The Home Of My Lawyer In… 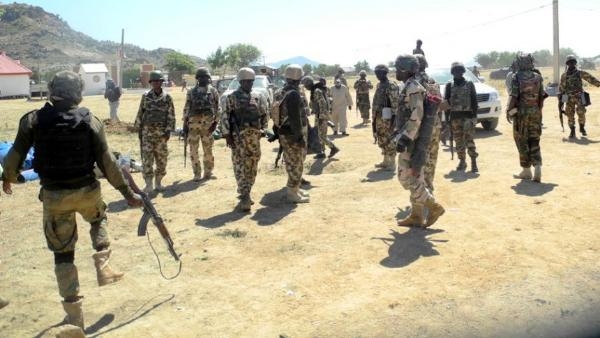 SAHARANEWS – The Nigerian Army, on Thursday, in its ongoing special operations in Zamfara State, said it killed seven armed bandits and arrested informants.

The troops achieved this, in conjunction with “the Nigerian Army Deep Blue Special Forces, the Nigerian Air Force Component and Vigilantes”, the Army said in a statement.

According to the statement sent to SaharaNews the spokesperson of the operation, Clement Abiade, a major, said the troops killed the bandits in a fierce encounter that ensued, “while on a clearance operation in Aljumana Fulani and Ketere villages in Zamfara State”.

“The bandits, who were armed with sophisticated automatic weapons were overpowered by the superior fire power of the troops, thus compelling the survivors among them to flee with gunshot wounds, abandoning their camp and logististics, which were destroyed by the troops,” the release said.

It said during the encounter, troops also recovered, “934 rounds of 7.62mm (NATO) ammunition, one AK 47 Rifle, one steel chain used by bandits to restrain kidnapped victims and seven motorcycles.”

“In a separate sting operation, troops on patrol to Kara market in Shinkafi Local Government Area of Zamfara State arrested a suspected informant who stealthily provides information to armed bandits in the general area. The arrest has further led to the bursting of three other suspected informants who are currently undergoing investigations with the relevant prosecuting security agencies,” the statement added.

It added that, however, during the operation, “one soldier paid the supreme sacrifice (died), while six others and a vigilante, who sustained injuries have been evacuated to hospital for medical treatment.”

ALSO READ:  BREAKING: On Security in Eastern Nigeria, it has nothing to do with ESN/IPOB. (video)---Bar Ifeanyi Ejiofor speaks

Mama, You Made My Dream Come True – A Heartfelt Thank You Message From Corper To Her Banana Seller Mother (Photos)