JUST IN: We Stand With Nnamdi Kanu On Election Boycott – Igbo Youths 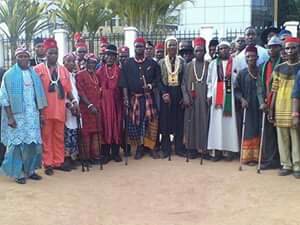 “Peter Obi emerging as the running mate of Atiku Abubakar in PDP is a well-planned game to entice us to participate in the Nigerian scam called election.”

ENUGU – The youth president of The Igbo Youths General Assembly (IYGA), Engineer Uchendu Agu said, “Nigeria as a state has failed the people”. He disclose this in an interview with our correspondent in Enugu, oclaiming that the electoral process in the country is a scam.

“Anyone who does a stupid thing over and over again and expect a good result is foolish. We will not vote again because all those we have been voting did not give us anything good but insults, intimidation, humiliation, and the killing of our people by those we voted for.”

“PDP, APC and other political parties are still the same people. Delivering power from Muhammadu Buhari to Atiku Abubakar is like pouring fresh wine into the same dirty pot.”

“Peter Obi emerging as the running mate of Atiku Abubakar in PDP is a well-planned game to entice us to participate in the Nigerian scam called election.”

“We urge everyone in the Southeast to obey Nnamdi Kanu’s directive, boycott the elections and remain indoor on the day of the elections. Anyone who goes against the directives and goes out to participate in the elections should be blamed if something unfortunate happens to him and she,” Uchendu said.