JUST IN: We’ve No Problem With Atiku’s Presidential Ambition —IPOB 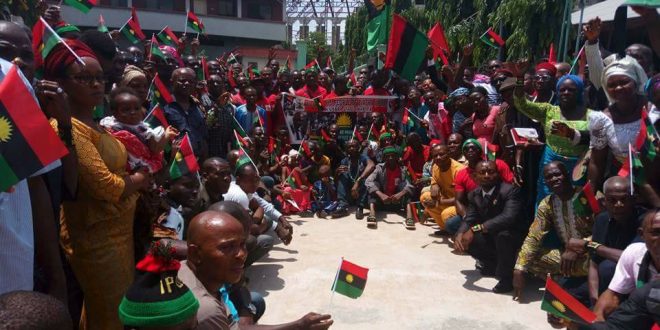 Kanu also said his reference of the Peoples Democratic Party, PDP, presidential candidate in the forthcoming Nigeria’s election, Alhaji Atiku in his radio broadcast, had nothing to do with his suitability to contest the office of the presidency of Nigeria.

IPOB in a statement by its Media and Publicity Secretary, Emma Powerful, quoted Kanu as saying

: “Let me make it very clear that my reference to Alhaji Atiku Abubakar being born a Camerounian has nothing to do with his suitability to contest the office of the presidency of Nigeria because that is the business of Nigerians, I am a Biafran.

“I was merely referencing the 1961 referendum that brought his part of Adamawa into Nigeria as a valid example that referendum is not an alien concept in Nigeria.

“Allow me also to state for the umpteenth time that our boycott of election has nothing to do with All Progressives Congress, APC, or Peoples Democratic Party, PDP. It is all about the destiny of a nation called Biafra.

ALSO READ:  Give them Biafra in the next 5 years we will become their slave and be begging them for food -- Nigeria told U.N

“Whoever advised PDP hierarchy to launch the orchestrated campaign of calumny against me and my family has done them a disservice because we are IPOB, we do not lose media wars no matter how long it takes.”