JUST IN: “Your Ultimatum Is Nonsense And Pure Blackmail” – Gov Okowa Hits Back 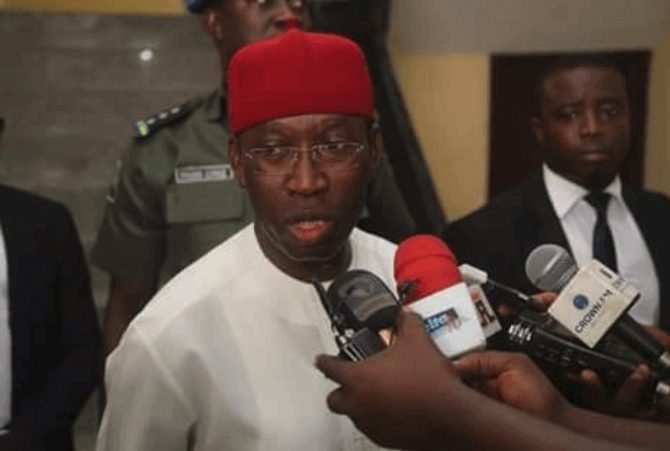 SAHARANEWS – Dr Ifeanyi Okowa, Governor of Delta State, has described the seven-day ultimatum issued him by the Socio-Economic Rights and Accountability Project (SERAP) to provide information on details of the budgetary allocations and actual spending on primary school education in the oil-rich state as “nonsense and pure blackmail”.

On Sunday, while reacting to the video of Success Adegor, a pupil of Okotie-Eboh Primary School 1, Sapele, Delta State, who was dismissed from school for failure to pay her exam levy, SERAP had issued Okowa a seven-day ultimatum to provide information on details of the budgetary allocations and actual spending on primary school education in the oil-rich state.

Reacting on Monday through his Chief Press Secretary, (CPS), Charles Aniagwu, Okowa told SaharaNews: “There are 36 states of the federation. In these 36 states, the governors of these states and indeed the federal government budget for education of their different states and ministries of education. If SERAP wants to know what anybody is spending with respect to education, why are you going to wait for the story of Success to begin to make such demands? Why don’t you ask every state?

ALSO READ:  JUST IN: It's Unfortunate That After 22 Months In The Senate, A Man Like Tinubu Still Lack Understanding - Saraki

“Let people ask of things for the purpose of developing Nigeria and we will move with them. We encourage anybody who is interested in what we are doing here. We don’t have anything to hide. Senator Dr Ifeanyi Okowa runs a very transparent government and the businesses we do here is on the basis of the transparency and if SERAP wants to know how transparency exist in the system, let them come to Delta but giving ultimatum as if they are the owners of the government in Delta state is not something that we are going to fall for. Nobody is going to blackmail us for cheap popularity.

“Why didn’t they give ultimatum to many other states where people are learning under the trees? Why don’t they give ultimatum to other places where they are not able to pay their teachers? In Delta, we not only pay our workers we also assist local governments to ensure that the teachers are well paid as at when due. There are states in the federation where teachers are even paid half salaries. In some other states, they are owed more than six months. I expect SERAP to go there and begin to demand for ultimatum so that we know that indeed they are very much interested in the development of this country and not playing to the gallery.”

When asked if the state government would respond to SERAP’s demands, he responded angrily, asking: “Respond to what?

“Our business is to govern our people in Delta State with the highest sense of accountability. I have not seen anywhere it is written in the oath of office that there must be one body who will come and harass us and make us abandon what we are doing. There is nothing we are hiding; our budget is very clear. We put it on the website. Let them go there; they will see it. We don’t have anything to hide.

“We have a House of Assembly. Those are the ones that should be giving Governor ultimatum in the first place, because the House of Assembly represents the people but when somebody else comes from somewhere, we don’t even know those who constitute them. Have they spoken to anybody? Have they come here to talk to us? Before you give ultimatum, you must first of all show what effort you have made to say I went to this man, he didn’t answer me. How do you just go to the media and give us ultimatum in the media? And you expect us to jump? We don’t even know who is giving the ultimatum.”