BREAKING:Police Officer Beheaded And Burnt In Anambra By…

BREAKING:Police Officers Break A Man’s Head In His… 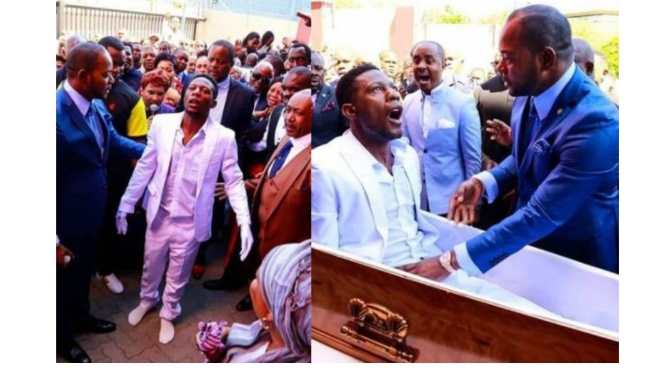 BREAKING – Remember the man that was controversially raised from the dead in Pastor Alph Lukau church in February? His name Elliot Brighton Moyo has died again.

State media has reported Brighton died last week in neighbouring South Africa and was buried on Saturday. Elliot is survived by his wife and had no children.

According to a relative, his stomach started swelling and didn’t stop for three days and on the third day, he died.

Brighton made headlines all over the world after he was caught on camera being resurrected by Pastor Lukau.

The resurrection became controversial after mortuary Kings and Queens reported Lukau to the police for abusing their car to stage a miracle.

When he came to Alleluia Ministries International there were reports that he was HIV positive and he had kidney failure and he also had TB (tuberculosis).

However H-Metro reached for comment, official from the church, who stressed that what happened in February was not a miracle.

“It was not a resurrection. They (Elliot’s family) were close followers of our church but they are not members. So when Elliot died, they heard movements in the coffin and brought the hearse to Pastor Alph.

“Then Pastor Alph was called downstairs it was because Elliot’s family had said they felt movements in the coffin and decided to bring the hearse to him.

“When they got to the church they spoke to one of the guys who normally attends to people who come to church sick. There is normally many who come bed-ridden and some in ambulances or on wheel chairs and they receive instant healing. Those are some of the miracles that happen at AMI.

ALSO READ:  JUST IN: Ifeanyi Ubah Reacts To Reports Of His Defection, Says He Will Not Be A Cheap Senator

“So the same happened with the hearse. When the guys saw the coffin they asked what was happening and were told that the family felt movements in the coffin and they believed that there was something happening in that coffin.

“So as you can see on the video, a lady ran into the building panting, to call Pastor Alph. From the way she was breathing and talking, you can tell she was shocked. So they told Pastor Alph there is a coffin outside and the person inside was moving.

“Pastor Alph went outside and he opened the coffin and when he did so, immediately – and when you watch the video you will also see this – he said, “He is breathing. And then he said to the church let us pray for strength into the man’s body not for resurrecting him. He did not say we are resurrecting him, no – what I’m telling you is exactly what is on the video.

“He then called him and said, “Elliot, Elliot, come out” something that anyone who would have been told that there is movement in a coffin would do.

“So it was not a resurrection. God just wanted us to come and celebrate what had already happened and he just used AMI to celebrate what was done already. Then he went into the church and people celebrated.”