COVID-19: Deaths In Nigeria, Much More Than NCDC In… 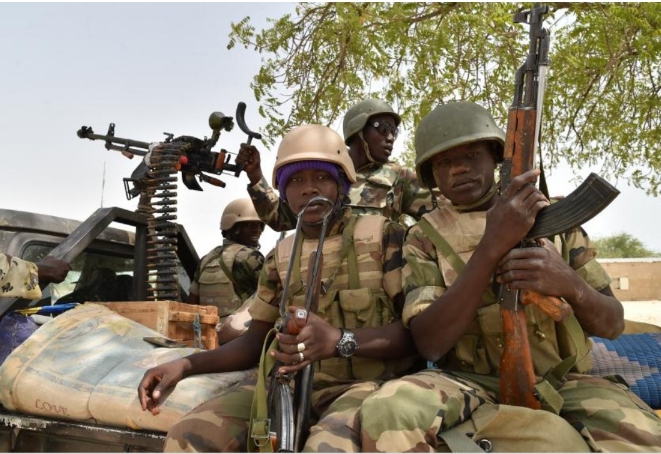 SAHARANEWS – The unprovoked attack and unnecessary killing of Biafrans by Fulani dominated Nigerian Army throughout Biafranland has taken another gruesome dimension since the emphatic rejection of Fulani Ruga settlements and National Life Stock Programs (NLSP) by Biafrans.

The Fulani terrorists in Nigerian Army uniforms stationed accross Biafranland, particularly the ones at the checkpoint along Aba/Ikot-Ekpene Highway, have once again recorded another death of a Biafran youth who is a commercial motorcycle operator (Okada) over his refusal to give them N100 bribe. This is another senseless checkpoint murder by a Fulani security operative in Biafraland.

Nigerian soldiers of Fulani extraction in their usual nonchalant way has killed another person, this time one Mr Chimaobi Nwogu a commercial motorcycle operator over his refusal to give a bribe of N100 (One Hundred Naira) to them at a checkpoint in Obingwa, Abia State. We wish to reitetate that this unnecessary killing is one too many and must have attending consequences.

It must be resprocated at the appropriate time. It is very pathetic that Nigerian Army would abandon their constitutional role of defending the borders of Nigeria from external aggression to descend into lowly criminality of extorting One Hundred Naira from motorists on countless checkpoints across Biafraland.

On a daily basis, hungry looking fully armed Nigeria soldiers can be seen chasing and tormenting innocent motorcyclists and bus drivers including private road users who are going about their normal business, just for the sake of N100. The saddest part is that these illegal extortion racket at check-points across Biafraland is non-existent in the north where these soldiers come from. Over the years check-points have become the perfect tool of intimidation and symbol of Fulani Jihadi occupation of Biafraland and must be brought to an end.

The fact is that blame lies with Okezie Ikpeazu and his fellow quislings in government houses across the East who for the glutonous opportunity of being rigged back into office by Abba Kyari and his cabal, have mortgaged the destiny of our people to their Fulani overlords. We are under attack on all fronts by killer Fulani herdsmen and trigger happy murderous Fulani soldiers in Nigerian Army uniform. One thing is certain and the Nigerian Army knows this too, the death of Chimaobi will not go unanswered.

Every death will be avenged. Those who are in the habit of lying their way through international diplomatic circles must look for a way to spin the senseless murder of this innocent young man at the hands of Fulani Jihadi soldiers bent on extorting money from innocent commuters across Biafraland. Nigerian Army will not get away with this murder, it is one too many.

As we continue to remind the world of the pain and suffering of innocent Biafrans at the hands of the dictatorship that is running Nigeria, let these episodes of senseless brutality against our people be recorded for reference and historic purposes for those that may seek to ignorantly defend Nigeria in the future.

Let it also be on record that IPOB will inevitably reciprocate accordingly against anybody or institution involved in the killing, harrassment or detention of any Biafran. We call on all observers of the misery that Nigeria has become to duly note and be aware of the brutality of the Nigerian state against Biafrans and never blame IPOB for any consequences this cold blooded murder of a young man going about his business will cause across Nigeria. IPOB will without doubt respond to this ugly event in kind.

We continue to call upon the American Ambassador to Nigeria, the British High Commissioner and other nations with diplomatic presence in Abuja and Lagos to convey the bitterness we feel at this loss to their home countries regarding the state of wanton brutality, mayhem, baditry and general lawlessness at the hands of this Fulani APC government, Fulani terror herdsmen and murderous Fulani soldiers in Nigerian Army uniform.

That a Nigerian Army chased a young man into his village and shot him dead in his compound in front of his wife and family is wickedness taken too far. The people of Ntigha-Uzor Community in Obingwa LGA should hold Okezie Ikpeazu and other Igbo governors responsible. Okezie Ikpeazu is giving political protection to Fulani murderers in Abia State because his allegiance and loyalty is to Abba Kyari’s ruling Fulani cabal in Aso Rock that rigged him into power and not to the people of Abia State.