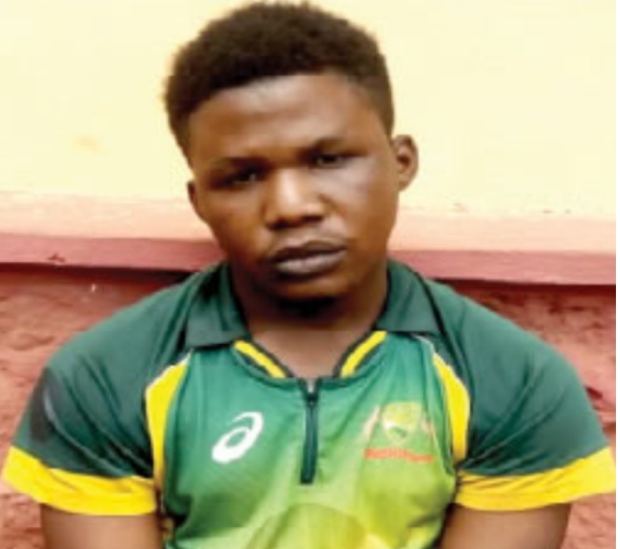 SAHARANEWS – Adenuga Eniola. the twenty-seven-year-old man who was recently arrested by men of Ogun State Police Command for allegedly raping a co-worker, identified as Faith Jude, to death and hiding her corpse has finally spoken.

In an interview with newsmen, he narrated how he committed the crime saying; ‘The lady involved was a colleague in the workplace; Faith Jude.

She had only been with us for about two weeks but I have been working in the company since July. I met her when she joined but we worked in different shops.

I am a mobile money agent and I work in one of the shops being run by our boss, while she worked directly with our boss’.

She was just a co-worker. I told her that I wanted to marry her, but she said she would think about it. She came to my shop the next day to collect some money on behalf of our boss and I asked if she had come to a decision on what our discussion.

When she told me she was having her periods, I insisted that she was lying.

I don’t know what came over me; I just wanted to have her. When she was screaming while I was trying to undress her, I used something – a piece of cloth – to gag her. In the process of having sex with her, she gave up and I did not know.

After I had sex with her, I discovered that she was dead. I did not know what else to do than so I covered her body in the shop. I was in panic mode; I didn’t know what to do. She was only there to collect money for our boss; I was the one that used that opportunity to perpetrate the ungodly act. I am not married, I am not a womaniser.

I don’t know why I got myself involved in this. I did not have any girlfriend; I don’t just know what came over me and made do what I did. I confirmed that she was having her periods. It was after I raped her that I saw bloodstains on my private parts. And I felt bad about it.

Why did you kill her? he was asked and he said, ‘I did not intentionally kill her; I think it was the cloth I used to gag her to prevent her from shouting that suffocated her and caused her death.

It was never intentional; all I wanted to do was to sleep with her. When I discovered that she was dead, I kept her body in the shop for three days until when my boss’ child came to the shop, said the place was stinking and that I should ensure I cleaned it up on environmental sanitation day. While cleaning the shop, I did not have any other choice but to take her corpse outside.

Then I called my boss to tell him that I had seen the corpse of the lady we were looking for. I lied, hoping that I would not become a suspect, but my boss told me to report the matter at the police station and that he would join me there. I told them the same thing at the station, but in the course of interrogating me, I confessed that I killed Faith.

DSS Arrests Another Journalist And Author Of ‘We Are All Biafrans’