We’ve been slow to acknowledge racism inside UN –… 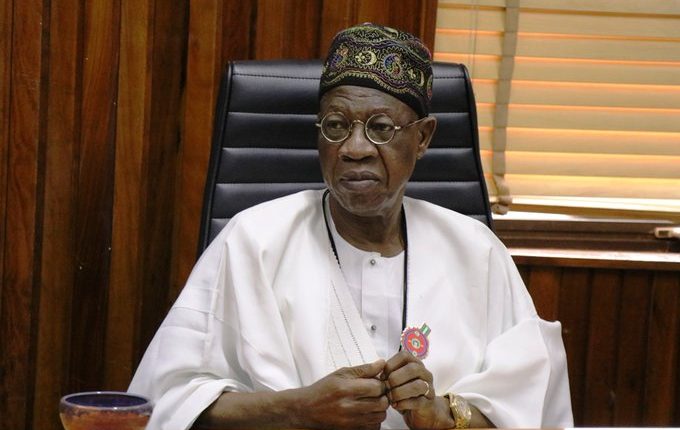 The crisis in the ruling All Progressives Congress (APC) in Kwara State can be traced to the Minister of Information and Culture, Lai Mohammed, a former senator, Suleiman Ajadi, has said.

Ajadi accused the minister of seeking to be the godfather of Governor AbdulRahman AbdulRazaq.

Earlier in the week, the crisis in the state chapter of the party sparked a free-for-all at the Banquet Hall of Government House where a meeting was being held ahead of the party’s membership registration exercise.

The party’s national registration and revalidation committee had called the meeting to ensure a smooth registration exercise amid the protracted crisis in the party in Kwara State, which worsened after the removal of Bashir Bolarinwa as the party chairman.

Bolarinwa was removed by the national caretaker committee of the party led by Yobe State Governor, Mai Mala Buni. He was replaced with Abdullahi Samari two weeks ago.

The development has been described as a fallout of a rift between AbdulRazaq and a group of party leaders led by the information minister.

Speaking on the crisis, Ajadi in a statement on Friday, alleged that Mohammed was using Bolarinwa to destabilise the state.

He alleged that the minister had perfected plans to stop the party’s registration “through a phantom court case”.

“The person to be blamed is the Honorable Minister of Information and Culture, Alhaji Lai Muhammed. He brought BoB (Bolarinwa) to Kwara State to come and be the Chairman of the Caretaker Committee. Even before the election, he was encouraging BOB to disrespect the then governorship candidate to the point of not attending the rally at that time,” the former senator said.

“Ask anybody, the former chairman hardly attended rallies with the governorship candidate then. And after he won the election, they continued their antics of propagating their lies against the governor. How can a state chairman of the party be going and encouraging others to go to radio stations to disparage the governor of the state? They were openly discrediting the governor under the guise of not carrying them along. How can you be disparaging somebody and you are accusing him of not carrying you along? Taking you along for what?

“Most of the people fighting this battle against him, he made their children SA (special advisers) this and that. He is doing projects in their communities. I don’t know the meaning of he is not taking them along. Nobody knows the meaning… if Alhaji Lai Muhammed had called the chairman he brought to order all along, it would not have gone this far.

“I remember a case when the governor wanted to go and meet Baba (Muhammadu) Buhari in Akwa Ibom, I saw the text message of Alhaji Lai Muhammed telling the governor that he should not go. How do you command the governor not to go to where he wants to perform his official function?

“Now, when they wanted to re-appoint this BoB (Bolarinwa), many of us raised this issue that he was a caretaker chairman. How do you say you want the caretaker chairman to succeed himself as caretaker chairman again? The current caretaker chairmen in other states were substantive chairmen of the party in their states. But Alhaji Lai felt this was the one he could use and he wants to continue using him to fight the battle against the governor of the state.

“Do you know that Alhaji Lai has instituted a court action against the APC? There is a court action; you can see it (waving the court papers). This is a court action that was arranged by the Minister for Information and Culture that they should stop Alhaji Abdullahi Samari from parading himself as the chairman of the caretaker committee and that this registration exercise should not continue.

“How can you say that a registration exercise that is going on in all the 36 states of the federation, including the FCT be stopped in your own state? If people can call Alhaji Lai Mohammed to order, there will be peace and if he wants to continue that way, we are ready for him. There is nobody that will be allowed to spoil this party for us in Kwara State because if they destroy it, there is nowhere else we can go. He can go back to Lagos.”

When contacted by SaharaReporters, Mohammed’s media aide, Segun Adeyemi said, “Currently, I have nothing to say, let me consult the minister first, I will get back to you. But if you don’t see my call, then know that we have no comment on the issue.”

CNG Plans To Protest Arrest Of Its Chairman, National Coordinator In 19 States