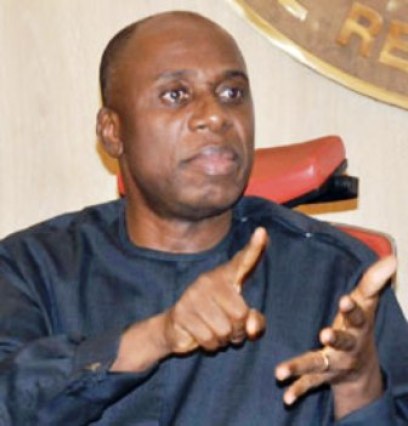 Nigeria’s transport minister, Rotimi Amaechi, has been heard in an audio recording to be expressing shocking pessimistic views about Nigeria and the administration of President Muhammadu Buhari, whose re-election bid he leads.

The recording was shared by Phrank Shaibu, a spokesperson for the Atiku Abubakar campaign.

Mr Abubakar, billionaire former vice-president, of the Peoples Democratic Party, is the main challenger of Mr Buhari, the candidate of the All Progressives Congress, in next month’s presidential election.

The recording contains a portrayal of Mr Buhari as a dismal failure who has been unable to meet the expectations of various segments of the society, ending with a dismissal of Nigeria as a never-going-to-change hopeless nation.

The transcript of the recording reads: “These are not things you publish ooo. If you publish them, you will never sit with me any day.

“The rate of poverty is very high. The people are hungry. Nigeria will never change!”

The claims, particularly regarding expectations, expressed in the recording may be correct.

Government’s own official information shows Mr Buhari has presided over a worsening national job situation, with the unemployment rate standing at 23.1 per cent by the third quarter of 2018 up from 18.8 per cent per cent by the end of 2017.

However, government officials argue jobs are not dropping but that it is the number of people entering the working age bracket that is outpacing the existing opportunities in the labour market.

Invariably, poverty, under Mr Buhari, also continues to soar, a crisis Nigeria has experienced for decades.

According to the World Bank 2017 Atlas of Sustainable Development Goals, between 1990 and 2013, Nigeria added 35 million people to its poverty population, jumping from 51 million to 86 million (and now over 100 million). Of the 10 populous countries surveyed, Nigeria is the only country that failed to reduce poverty.

By 2018, Nigeria has overtaken China and is only behind India, arguably, with the highest number of extremely poor people within one national territory.

In an earlier recording also shared by the Atiku campaign, Mr Amaechi appeared to be describing Mr Buhari as a leader that does not listen and care.

“In fact, there was one case of somebody in Onitsha, a trader in Onitsha who couldn’t sell his goats during Sallah. And I was with Oga on the plane and the man was busy abusing Buhari. He said, ‘Amaechi, come, what is my business with Onitsha goat seller?’”

When contacted, David Iyofor, the spokesperson for Mr Amaechi, said the minister’s team was still reviewing the recording and needed more time to do so before commenting on the matter.

Meanwhile, Mr Shaibu said the leaked tape has shown that even the president’s appointees lacked confidence in his ability to transform the country.

He said, “The President should just quit honourably instead of wasting taxpayers monies on a failed reelection bid.
“The truth is that the other day, the President confessed that the economy had collapsed under his watch.

“Truth is, the President has established a record of failures which probably no other President would ever equal or erase. Mrs Aishat Buhari was partially correct when she stated that two people are preventing her husband from performing well. With this audio tape, if the two don’t include her husband then she is not completely being truthful.”

It is not the first time a minister would appear to be expressing no confidence in the leadership of Mr Buhari in a leaked recording.

Former minister for women affairs, Aisha Alhassan, was in a recording – which he admitted – saying she preferred Mr Abubakar to Mr Buhari as president from 2019.