Fulani herds­men, bandits not worth worrying about — Bagudu 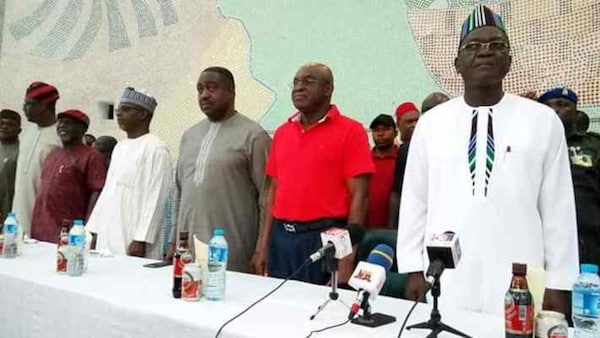 Benue state governor, Samuel Ortom has inaugurated the Peoples Democratic Party (PDP) council for the Ortom/Abounu governorship campaign organisation, ahead of the 2019 elections.
The ceremony took place at the Benue state governor’s lodge in Abuja on Wednesday, November 7.
Governor Ortom who thanked members of the council for accepting the task, affirmed the resolve of PDP to embark on issue-based campaign to ensure the victory of the party in the coming elections.
He expressed confidence in the personalities on the campaign council, saying that PDP remains the best option for Benue people and other Nigerians.

The governor said the role of the council would be to oversee the day-to-day activities of the campaign organisation headed by the director-general.
Responding, Senators David Mark and Iyorchia Ayu, the speaker Benue state House of Assembly, Titus Uba as well as other members of the council took turns to commend Governor Ortom on the manner he has handled affairs of the party since he assumed its leadership in the state.
They also pledged their commitment to ensuring the victory of PDP in the coming polls.
Members of the campaign council are:
ALSO READ:  JUST IN:Osun Students Attack 45-year-old NANS President, Asefon For Backing Buhari On ‘Illegal IGP Adamu’s Tenure Extension’