‘I Have Given Army All the support they have… 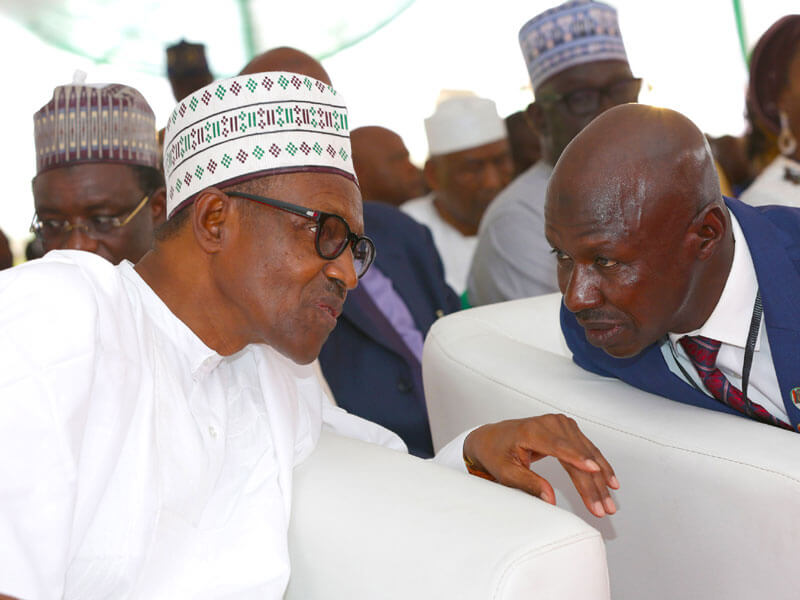 International rights groups have written President Muhammadu Buhari, saying embattled former Acting Chairman of the Economic and Financial Crimes Commission, Ibrahim Magu, is unlikely to get justice at the Presidential Panel established to probe him as it was being influenced by the Attorney-General of the Federation and Minister of Justice, Abubakar Malami.

Magu has also been invited for questioning by the Code of Conduct Bureau over alleged corruption involving breach of code of conduct for public officers.

He was accused of buying a home in Dubai worth over N570m and being unable to account for the interest accrued to over N500bn recovered by the EFCC but he denied the allegations.

The Ayo Salami panel is yet to submit its report 130 days after it commenced sitting.

In the letter signed by HEDA’s Chairman Olanrewaju Suraju; Global witness Director, Simon Taylor; Cornerhouse Director, Nicholas Hildyard; and Re:Common Director, Luca Manes, the groups expressed profound concerns over the conduct of the judicial inquiry into allegations made by Malami that Magu had abused his office when he was Acting Chair of the EFCC.

The international rights groups asked President Buhari to dissolve the panel if it cannot establish a case against Magu.

The group said it had no problem with the investigations but rather impartial observers have given up hope of Magu receiving a fair hearing.

Suraju said President Buhari should be aware that international anti-corruption campaigners now regarded the panel as nothing less than a Kangaroo court designed to witch-hunt Magu and slow down the anti-corruption wheel.

“At almost every stage, Magu has been denied due process. He was not provided with the allegations against him until 35 days after the panel had convened.

“His lawyers have repeatedly been excluded from many of the hearings. Most of the witnesses were examined without Magu being present.

“Witnesses have been allowed to testify without swearing to an oath of truth,” HEDA and its partners said.
The group said Malami had refused to comply with a subpoena ordering him to give testimony on the dubious grounds that he was merely passing on complaints that had been made to him by others.

“We have no reason to doubt the integrity of the panel’s chair, Justice Ayo Salami, before his appointment; but he is just one member of a panel that has been packed with Ministry of Justice and security agency officials who are among Magu’s accusers.

“If true, this would be an insult to justice. We implore you to act. When the panel was established on 3 July 2020, you gave it 45 days to report. That deadline has long passed.

“The report was that another 60 days was granted after the expiration of the original 45 days. It is now more than 120 days,” Suraju added.
The group wondered how much longer must the travesty continue, saying the panel has had its time, disobeyed the clear instructions to report by a specific deadline and should now be disbanded.

The anti-corruption groups argued that every day that passes with this matter unresolved was a day that gives succour to those who oppose the government’s fight against corruption.

“We cannot overstate the damage that Malami’s vendetta against Magu has inflicted on the reputation of Nigeria and indeed your Presidency. It encourages the view that those who fight corruption can, with the connivance of senior government officials, be brought down or incapacitated through flimsy and totally unsubstantiated accusations of wrongdoing,” the group added.

“Nigeria needs those of the calibre of Mr Magu to be at the forefront of the fight against corruption, not side-lined because he insists that no-one should be beyond the reach of the law.

“Without Magu’s leadership, as the High Court in London recognised, the P&ID case would likely have been decided in P&ID’s favour.

“With Eni now taking Nigeria to the International Centre for Settlement of Investor Disputes for declining (rightly) to convert OPL 245 to an Oil Mining License, the restoration of Magu to his office is of paramount importance,” the groups said.

HEDA urged President Buhari to take firm decision to restore the diminishing reputation of the country in her fight against corruption.