“Now That The Army Has Failed In The Fight With Boko… 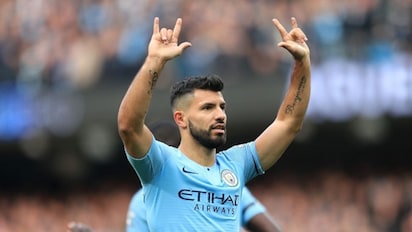 Manchester City striker Sergio Aguero will be looking forward to a decent performance against Manchester United on Sunday, November 11, Manchester derby slated for the Etihad. The Premier League champions play host to bitter neighbours Manchester United with nine points separating both sides going into Sunday’s cracker. Aguero, who has already netted six times for the Pep Guardiola side in 10 matches, will be hoping for more against the Jose Mourinho tutored-side. Interestingly, with less than 24-hour to the big game, the Argentine has taken to the social media to unveil his new silver/blonde hair cut for the top-of-the-table clash. He also took out time to applaud his stylist for handing him a new look. Already, pundits are tipping the defending champions, who are only going to be without Belgium star Kevin De Bruyne as favourites to emerge victorious after the derby game.

However, Aguero, who was missing in action against the Ukrainians in the Champions League, is expected to get Guardiola’s nod to start from the onset. Reacting ahead of the game, the Spaniard stressed that nothing much was in contention, maintaining that a win for his side would not end Man United’s quest for the league silverware. “Win or lose they are not out of the race no way. In November? It’s impossible,” he noted, even as he was quick to add. “Of course games against contenders are special because if you win they don’t win but we are in November so maybe the game at Old Trafford [in March] will be more decisive. “They’ve shown it, they were in a tough moment, they recovered well.

“It’s a big club, big club mentality, since we arrive we try to convince (the players) that club never give up,” Guardiola summed up. Meanwhile, Legit.ng previously had reported that Manchester United manager Jose Mourinho described Man City as ‘untouchables’ ahead of their derby this weekend. The Citizens have been in top form in their title defence – sitting atop of the EPL table with 29 points from 11 games. United on their other hand are seventh on the table with 20 points after the same number of matches.