JUST IN: The demand for Biafra is in line with the UN…

METELE MASSACRE : Our colleagues Corpses are still in the bush – survivors recounts ordeals 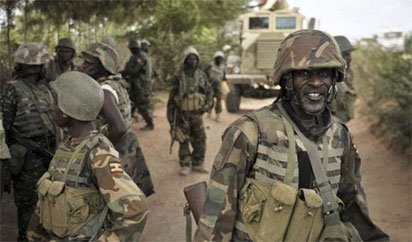 A Nigerian soldier who survived the Boko Haram attack which left over 100 troops dead and many others injured in Metele, Guzamala Local Government Area of Borno on Sunday, November 18th, has narrated what happened.

The soldier identified as Don Chuks Abaga took to social media to reveal how the superior fire from the Boko Haram insurgents left them demoralized and forced them to retreat.

HE SAID   “Am a Survival of Metele attack on 18th. We were attacked by 5pm by Boko Haram. A soldier on the observation post alerted everybody in the camp were we all took cover and dash into our trenches we started exchange of bullet that lasted for about 15mins, they came with enough gun truck mounted with A.A GUN, the gun truck I can count when the attack was going on was 13 gun trucks, 2 Mrap, 3 Ammo personnel carrier (APC), when we noticed the type of weapon and the rate of volume of fire that was coming from their weapon we were demoralise by their fire power and heavy volume of fire.”

ALSO READ:  In Nigeria History,No administration has done as much as Buhari – Lai Mohammed

“We were force to withdraw to avoid been killed by the insurgence we ran into the bushes to save our lives. From there we start to locate our colleague and move to 119 battalion camp where we were welcomed and taken care of. The following morning the morning the 7 bridage Commander came brig. General Yahaya and ask us to go for evacuation of soldiers died body we were given air support so called surveillance in which we are communicating together to go metele to recover bodies.”


“So we ask the pilot to move ahead of us and tell us the situation of the camp he went ahead and came back that everywhere is Charlie charlie means everywhere is okay from there we carried only 8 dead bodies on the road that lead to the camp from no where we started hearing firing from our camp Boko Haram are in our camp from they started firing at us with there AA gun so we turn back to 119 camp back up till now soldier dead bodies are still in that bush as am speaking to you the Nigerian Army have not recover any dead bodies.”

“Only that 8 dead bodies we could recover don’t let any General deceive you we lost more than 150 soldier in the attack not 44 soldier. I can testify this anywhere.”  “I have questions for the chief of army staff  Lt. General TY Buratai


1.What is the role of OPERATION LAST HOLD in North East ?

2.What was the 1 BILLIONS DOLLAR USED FOR?

3.What is the Normal deployment of troops in war”

We at Support The Nigerian Military Group so make this publication from our inbox as the soldier requested that his name and image be published, this shows how frustrated he has become in the battle field.

MELETE MASSACRE : We only lost about 31 soldiers and few injured – Nigerian Army