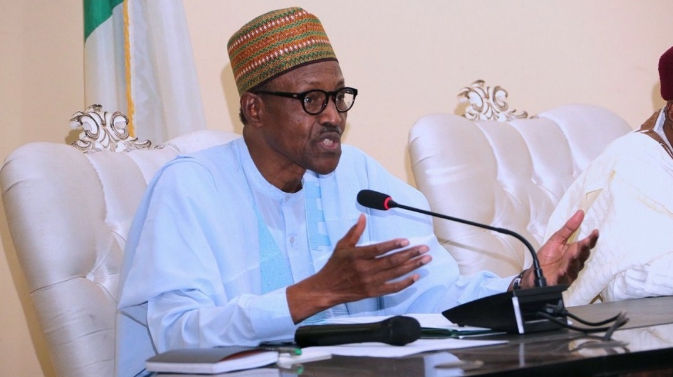 SAHARANEWS – President Muhammadu Buhari Wednesday in Abuja declared that he is fully committed to the unity of Nigeria, and will devote all his time and energy to promoting it for the benefit of Nigerians.

Speaking during a visit to the State House by a delegation of Benue State Council of Traditional Rulers led by the Tor Tiv, Prof. James Ayatse, the President called for better appreciation of the historical relationships among various communities in order to sustain the nation’s unity.

Stressing that ties between the Tiv and his own ethnic Fulani stock, which predated him and the current generation, helped in ensuring peaceful and harmonious co-existence among the people, he expressed optimism that such cordial bonds will continue to endure among various groups and serve as a strong unifying force in the country.

President Buhari decried the misunderstanding of internal conflicts by many people at home and abroad, citing the farmer-herders clashes which in several places had been misconstrued as religious, when in fact they arose from social and cultural factors.

He restated his appeal for better understanding of the nation’s diverse cultures in order to engender a healthier co-existence among the people, while fortifying and strengthening the unity of the country.

Responding to the narration of the Tor Tiv on the plight of Internally Displaced Persons (IDPs) from the recent conflicts in the State, the President said he was aware of that, and all that obtains in the Northeast, the Northwest and the South-South.

He noted that it is in realisation of the foregoing and the urgent need to ameliorate the plight of the IDPs that he created the new Ministry of Humanitarian Affairs, Disaster Management and Social Development, “so that we have a ministry that coordinates their demands, and we avoid duplication of resources.”

President Buhari expressed delight with the leadership of the Tor Tiv and other traditional rulers in their various communities as well as for their strong support for his administration.

He promised to look into the “long list” of the delegation’s demands, and thanked the royal fathers for showing appreciation for what his administration has done in the State in terms of projects and appointments.

Earlier, the Tor Tiv had described the recent triumph of the President at the Presidential Election Petition Tribunal as “God-given victory and mandate to reconstruct, rebuild and unify the country and take it to the Next Level of socio-economic development.”

“We are here to pledge our support and encouragement to your administration and its laudable programmes,” His Royal Majesty added.