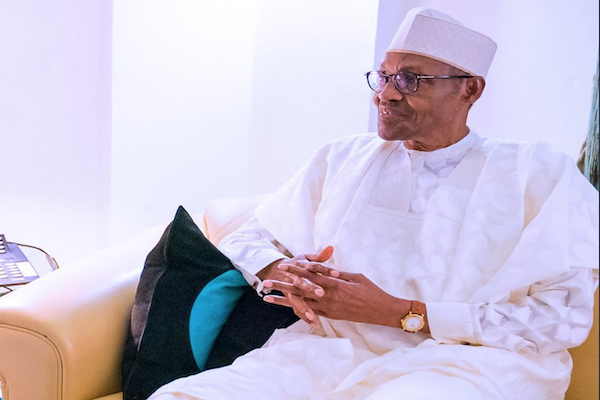 SAHARANEWS – President Muhammadu Buhari has said that he decided not to hand over power to Vice President Yemi Osinbajo when he travelled to the United Kingdom on a private visit from April 25 to May 5, 2019 because there was no constitutional requirement for him to do so.

The President further stated that the only time he needs to hand over to Osinbajo is when he is proceeding on leave or going to be out of the country for more than 21 days.

Buhari said this in a six-paragraph counter-affidavit deposed to on his behalf by one Mr. Friday Atu, a litigation officer in the Civil Litigation Department of the Federal Ministry of Justice.

A Lagos-based lawyer, Inibehe Effiong, had sued Buhari and the Attorney-General of the Federation over the President’s failure to hand over power to Osinbajo in April.

Effiong asked the court to determine whether in view of the extant provisions of Section 145 (1) of the Constitution of the Federal Republic of Nigeria, 1999 (as amended), Buhari can validly proceed on vacation for any length of time without transmitting a written declaration to the National Assembly to that effect, which will empower the Vice President to perform the functions of the President in an acting capacity.

In his response, however, Buhari stated that the Nigerian Constitution does not make it mandatory for him to transmit a written declaration to the President of the Senate and the Speaker of the House of Representatives to enable the Vice President to act as President except when his vacation exceeds 21 days.

The affidavit read in part, “It is a fact that the 1999 Constitution (as amended) regulates the performance of the duties of the President of the federal Republic of Nigeria in situations where the President is proceeding on vacation or is otherwise unable to discharge the functions of office.

“That it is a fact that where the President embarks on a vacation or otherwise is unable to discharge the functions of his office and fails to transmit a written declaration to that effect, he will be considered not to have complied with the constitution (as amended).

“That the time within which the President has to transmit a written letter to the President of the Senate and the Speaker of the House of Representatives of the Federal Republic of Nigeria is 21 days.

“That the President’s foreign trip lasted for nine days from April 25, 2019 to May 5, 2019. The President did not exceed the 21-day period required by the constitution. It is in the interest of justice to dismiss the claims of the plaintiff.”

Buhari equally asked the court in a preliminary objection to strike out the suit because the lawyer lacks the locus standi to institute the case.

The case is before Justice A. O. Faji of the Federal High Court in Ikoyi, Lagos and has been fixed for Monday, October 7, 2019 for hearing.

The PUNCH reports that in the past, Buhari had been known to hand over power to his deputy anytime he was travelling out of the country for unofficial engagements.

For instance, when the President travelled to London on a working leave on August 3, 2018 and returned on the 18th, spending a total of 16 days, he handed over to Osinbajo.

It was while Osinbajo was acting President during the same period that he sacked the Director-General of the Department of State Services, Lawal Daura, a move that was said to have been vehemently opposed by those close to the President.

Incidentally, since Daura’s sacking over a year ago, the President has not transferred power to Osinbajo again.

The President has in recent weeks curtailed the powers given to the Vice-President by first removing him as the head of the economic advisory team and asking him to seek special approvals before taking certain actions.

There have been reports that the cabal which controls the Presidency is opposed to Osinbajo’s purported 2023 presidential bid.