Nigerians Should Call For Independent Panel To Assess… 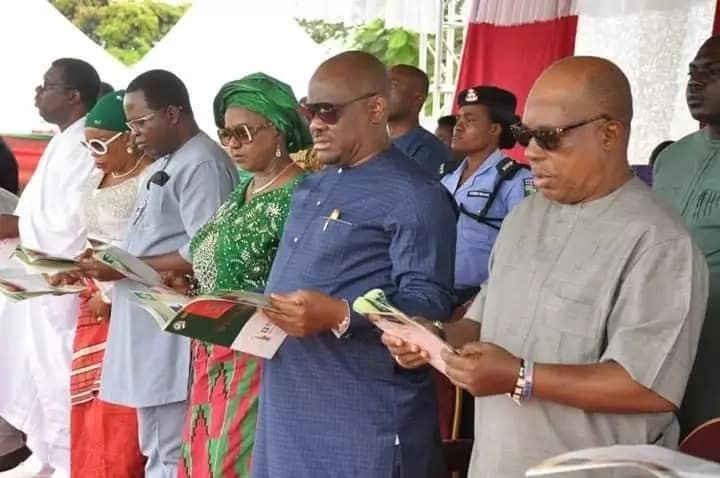 The Rivers state governor said that the allegation was false and a mere face-saving measure. Going further, Wike insisted that GOC runs an oil bunkering scheme

Governor Nyesom Wike of Rivers state has dismmised bribery allegations levelled against him by the General Officer Commanding, GOC, of the 6 Division of the Nigerian Army, Major-General Jamil Sarhem.

The GOC had claimed that the Rivers state governor attempted to bribe him.

The governor who spoke during the valedictory session of the Rivers state executive council, said that the GOC recently appeared before the House of Representatives Committee on Army, but never made any such allegation, because nothing like that took place, Vanguard reports.

Wike also insisted that the GOC runs an oil bunkering scheme, which cannot be swept away by flimsy allegations. Meanwhile, the Rivers executive council has been dissolved.

Governor Wike who announced the dissolution of the state executive council on Wednesday, May 22, during the Valedictory Session of the executive council said he would continue to promote Rivers first at all times, adding that the interest of state was ahead of all other considerations.

He thanked members of the former state executive council for their contributions to the development of the state.

He said: “It has been a rewarding experience and I am quite impressed that one worked with these persons of capacity.

“All the achievements we recorded were made possible because you worked.’’

Recall that SaharaNews had reported that Jamil Sarham, general officer commanding 6 division of the Nigerian Army, alleged that Governor Nyesom Wike offered him billions of Naira in bribe to compromise the 2019 governorship elections in the state.

According to Aminu Iliyasu, the division’s spokesman, Sarham said Governor Wike decided to witch hunt him when he turned down the offer.