“Now That The Army Has Failed In The Fight With Boko…

Nigeria Government And The Games Of Blackmail Against Lawful IPOB 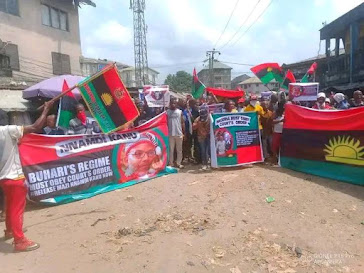 Ikedi Ohakim, a former governor of Imo State, was attacked a few weeks ago in what is thought to be a planned assassination. Luckily, Ikedi survived the attempt on his life.

The Nigerian government and its media outlets would have blamed IPOB if the assassination plot’s gunmen had killed the former governor. Thankfully, Ikedi survives to tell his story on his own. He said that his attack was carried out by highly trained assassins and that IPOB had nothing to do with it.

In a similar vein, on January 14, men thought to be employed by the state government attacked Ikenga Ugochinyere’s residence, which serves as the spokesperson for the Coalition of United Political Parties (CUPP). The attack resulted in the deaths of others, including the elder brother of Ikenga Ugochinyere, and the burning of several properties, including numerous parked automobiles within and around the compound. They would have blamed IPOB for the attack to damage the impeccable image of the peaceful movement if Ikenga Ugochinyere had not raised an alarm while the attack was taking place or if they had killed Mr. Ugochinyere.

Despite IPOB’s ongoing distancing herself from violence and criminality, the Nigerian government has remained determined to use cheap blackmail against IPOB with the assistance of the county’s sold-out media outlets. Giving a dog a bad name was all that was needed to kill it.

However, IPOB has pledged to maintain order in the face of all threats and extortions. The movement has also maintained that nothing can impede her peaceful pursuit of total freedom for the people of the old Eastern Region of Nigeria (Biafra).

2023: Gov. Badaru tells voters to ignore the lies and propaganda of the PDP.

Engaging With Nnamdi Kanu’s Siblings On Matters Concerning Biafra, Is As Useless As Bread Submerged In Dirty Water