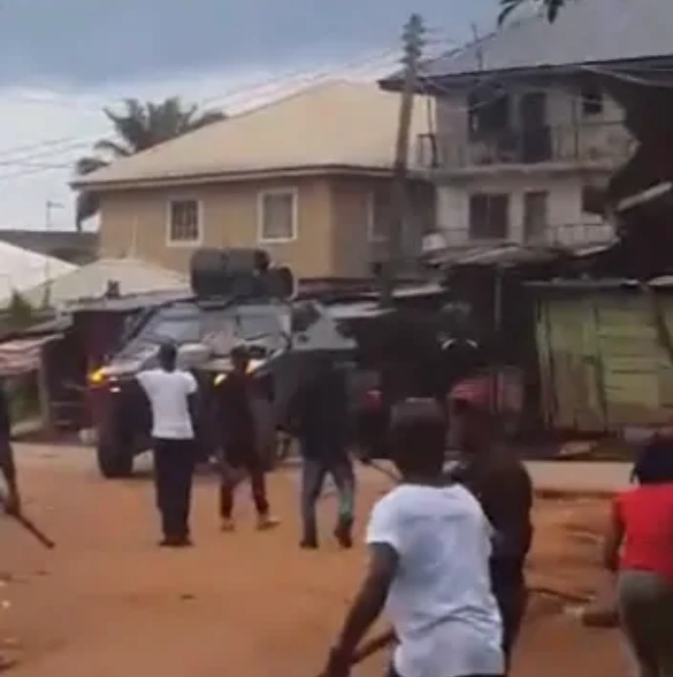 SAHARANEWS – Emmanuel Kanu is the younger brother of leader of the Indigenous People of Biafra (IPOB), Nnamdi Kanu, has alleged that the Nigerian police are plotting to arrest his father.

The CP said police got intelligence report that IPOB members were planning to demonstrate in Afaraukwu over the invasion of their leader’s home by the military and he had to beef up security there. Is this true?”

Did the Commissioner of Police investigate that intelligence report?

“That intelligence report is a false report because as far as I am concerned, there was no proper investigation carried out. Whoever that gave police that information is perhaps deceiving them; it was a false intelligence report. The question there now is, was there any protest?

There was none. Then why is he still leaving his men within a community that is very peaceful? That is the question everybody is asking.”

Police denied ever coming near your home as alleged; that the allegation was mere propaganda. What do you have to say?

“We have picture evidences everywhere which of course you can confirm; the pictures are everywhere on social media. The first day they came, they were right in front of our house, we captured them on CCTV cameras as well. Remember initially they lied that they never came to our house and we confronted them with evidences, they now admitted and started giving all these flimsy excuses. Now, let me make it clear, IPOB is not a terrorist organization neither is it violent in her agitation. We do not carry arms; therefore I do not know why police should be perturbed about our activities. They should leave us alone.

Proscribed in what sense and over what? How can you say you proscribed an organization that is not violent and does not carry arms, but goes about the agitation for the freedom of her people legitimately? They are joking. On the claim by the police that my brother Nnamdi Kanu is a wanted man, it is laughable. Nnamdi Kanu if they don’t know is an internationally acclaimed personality who has been moving round the world freely. How can they say he is a wanted man when he is moving round the globe freely preaching the gospel of freedom for his people?”

Police say in as much as they have no intention of arresting your father, but they will not waste a second to arrest your brother if he steps foot on Abia soil. Do you think this should be so?

“It is ludicrous to say you are going to arrest an innocent man. Okay, let me ask, what offence has Nnamdi committed in Nigeria that will make anybody think of arresting him? They should channel their energy and resources to the North East where Boko Haram has been wrecking havoc. They should go there and arrest the Boko Haram leader, Ibrahim Shekau; he is right there in Maiduguri, they should go there and arrest him and not Nnmadi that has committed no offence known to law.

“Let me tell CP Ene Okon one thing he should know, Nnamdi is fighting even his own course. Is he not an Igbo man? He is an Igbo man inside out, forget about what anybody may claim. His name, Ene and Okon are all Igbo names, so, Nnamdi is equally fighting for his freedom. He should therefore applaud Nnamdi instead of vilifying him as he is trying to, just to please his paymasters

Nnamdi Kanu Sets To Address The World Today In A Live Broadcast From Japan, Stay Tuned To Radio Biafra London