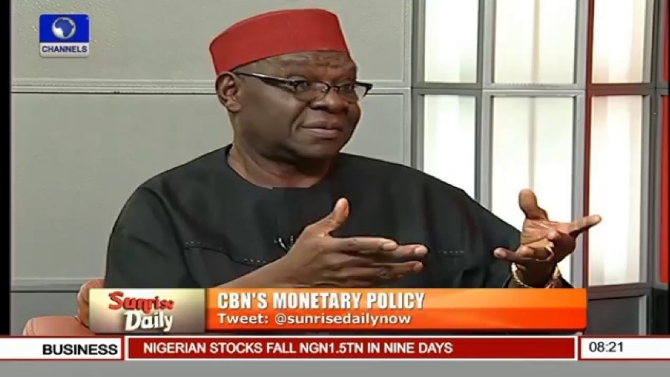 SAHARANEWS – Dr. Kalu Idika Kalu, a former Finance Minister, at the weekend, said that Nigeria is already a disintegrated country but still being held together by a false sense of unity.

Kalu, a World Bank trained economist, urged on the Nigerian Government to postpone the 2023 elections to give way to address the myriads of problems facing the nation.

“We have already disintegrated; it is just that it is not so easy. We have this false sense of something holding us together,” he was quoted by the Sun.

“What I’m emphasising is that the enforcement of the law; if you are robbed, injured, if you are dispossessed and you know that there is somebody there whose duty is to bring remedy in some form, you will take the risk.

“What happens when you begin to suspect that if something happens to you, you don’t have a cover? At that point what is the difference between talking of disintegration; you are already disintegrated.

“It takes a lot to kill a country; you can never tell how long it took God to form all these things. Of course, He has the supreme power, he formed them in no time at all, but look at the earth, look at the trees, the rivers, the mountains, the structures, etc, it is not so easy to tear them apart, but because it is not so easy to tear them to pieces, you also get a false sense that maybe something is still holding us together.

“We are already in piece and pieces; we are already cut into different communities to a large extent. The point is, because of the gravity of the situation, no country should allow itself to get down, quite down well as we have gotten. Also look at Africa, with a few exceptions. Look at what is happening in South Africa.

“As a minister, I was in Angola and we had so much respect because of what we did, Nigeria was always counted among the frontline states, even though we were miles away from South Africa.

“In the fifties, we were sending lawyers to defend the Mao Mao leaders in East Africa, thereafter, we had lawyers, judges in high demands all over Africa and beyond in the international system.

“Highly respected Nigerians were there; we still do to some extent. By and large, we have lost about 80 per cent of what we had at the dawn of independence.

ALSO READ:  UNBELIEVABLE: Tinubu, Oshiomhole ABANDONES Buhari When They're Needed The Most - here are the reasons

“Taking all what I have just said, 2023 is just around the corner. If around the corner we have all these problems, the issue of presidency, I’m not just talking for the Igbo, but for any other group, it is better for us to push 2023 election forward and resolve our problems, even if we have to delay by one year or two years.

“Some will argue that we have had so many elections and we clap for ourselves. So many elections, but look at how the country is and we are still in courts, and at a level where it is believed that it is being negotiated not by judicial process, but by extra judicial processes, politics, and financial muscles, ethnic, and religious considerations. Addressing these problems is far more important issue than 2023.”