Amidst War Against Coronavirus, Enugu State Commissioner For… 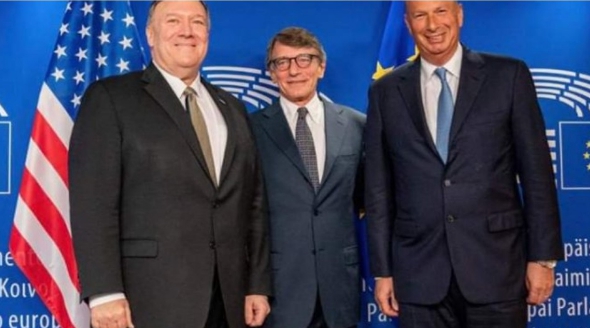 SAHARANEWS – Calls for the rebirth of the defunct Republic of Biafra have been increasingly heard on the streets of Nigeria in recent times. Following the reunification of Nigeria and Biafra in 1970, the world looked forward to a new Nigeria without the ethnic-tinged political injustices that had alienated one of the most important ethnicities in Nigeria – the Igbos and their near-kins- to the point of seeking a country of their own by force in 1967.

But soon enough, it became clear that, rather than do the sensible thing, some successive Nigerian regimes vying have used unitary tactics to further alienate the Biafrans that inhabit Nigeria’s oil belt. While some previous regimes had made-pretend that this was not the case, the current regime that came to power some four years ago has made no secret of its disdain for the former Biafrans.

This disdain has lately spread to other ethnicities as well, especially the minorities in central Nigeria and the Yorubas in the southwest of the country, thus leading to the notion that Mr Buhari, a Fula, is driving a neo-supremacist agenda aimed at elevating his own people to the status of the new suzerains of Nigeria. In other words, Buhari is unwittingly engaged on a course of ‘reverse separatism’ from the very top as President.

Late last month, Nigeria’s former President, Olusegun Obasanjo virtually accused Buhari of stoking ‘fulanization and islamization’ of Nigeria; and on July 15, Obasanjo published an ‘open letter’ warning Buhari that his ‘hateful’ policies are fueling agitations that might disintegrate the country. Before this, a former Nigerian army chief who had fought Biafra, Theophilus Danjuma had submitted a petition to the UK Parliament alleging essentially the same thing; and this is after he had called on his people of central Nigeria to prepare to defend themselves.

On the global stage, both President Trump, VP Pence and others have expressed concerns on the rising spate of unchecked mass slaughter of Christians by non-State actors – the Fulani herdsmen – who are credibly suspected of being pampered by Mr Buhari.

Before all these, Nigerians appeared to have succumbed to this new low until the coming of a fiery British citizen of Igbo ethnicity, by name of Nnamdi Kanu. He alone is responsible for the recent reawakening of the passions that have managed to push-back at President Buhari’s evident mistreatment of the region of Nigeria that was once Biafra, a region Buhari has derisively referred to as ‘five percent’ of Nigeria after failing to win its electoral support.

The rapid-fire growth of the Biafra independence movement since early 2016 is proof of its rising popularity and lends credence that all is not well in Nigeria of the current era. To some degree, Kanu’s consistency and near-prophetic renderings have encouraged non-Biafrans to now be speaking more boldly of a ‘restructured’ Nigeria. Mirroring Mr Kanu, some have even ramped it up to calling for outright dismemberment. This includes ranks that had enthusiastically joined in fighting Biafrans in 1967.

Mr Kanu leads an internationally coordinated and well-organized group best known by its acronym – IPOB, which has disavowed the military option (unlike in 1967) but is instead calling for a well-ordered separation through referendum. In September 2017, governors from the Biafran region were already talking with Mr. Kanu when Mr Buhari ordered his military to crackdown on him and his followers, leading to many casualties. This – plus other recent military excesses against IPOB – has increased domestic and international support for Biafra’s self determination.

The Nigerian government’s military response was wrong and silly if the intention was to compel Biafra’s loyalty or get the gutsy Kanu to back down. The absence of provocation for the military operation expectedly led to the credible suspicions that the Nigerian government merely wanted Kanu dead as a means of breaking the ‘stubborn’ Biafrans and discouraging other ethnicities from following the same path.

Independence movements commonly start with a small number of idealists, yet quickly grow when central governments respond with repression. In such circumstances, the desire for freedom takes deeper root and flourishes the more. So, the initial responses of central governments to such movements are critical to their ultimate outcome. While that of Scotland, Quebec and a few others slowed due to the pacifist approaches of their central governments, that of Nigeria appears to be on a geometric rise. It’s not hard to figure out why. It happened in the former Soviet bloc.

There are currently millions of open followers of Mr Kanu and many more that are passive. This is perhaps part of the reason the government of Mr Buhari panicked and decided to pursue the military option. Yet, the bloodshed and trauma such approach has wrought are well in excess of any practical gains for Nigeria’s nominal unity, and appears to have strengthened the resolve of the agitators, in addition to winning them new friends in Nigeria and abroad.

All considered, with high risks to its leaders and the uncertain path to success, a secessionist movement is rarely about lack of patriotism for one’s mother country but is often a pragmatic response to the injustices of such mother country. Even with popular support, these movements rarely have the military capacity to impose their will on the state from which they intend to secede. It, instead – like IPOB – seeks to raise national consciousness to a point where it hopes will encourage genuine dialogue for a better, looser union or a ‘velvet’ divorce, as we saw in Czechoslovakia.

Kanu’s rhetorics may have been passionate and frank but that he was already talking with Nigeria’s leaders was demonstrative enough that he was smart and adequately attuned to the realpolitik of a modern independence struggle. So, what was it Mr Buhari secretly feared that led him to pitch his troops against civilians; and even proceeded to get them declared terrorists when he very well knows that they are not?

It bodes well that, prompted by the meteoric rise of Kanu’s movement, some of Nigeria’s other important regions – such as the Southwest – have suggested that what is more practical in Nigeria of the moment is a relatively high level of regional autonomy like it was before Nigeria’s civil war. The logic is that loosening the ties that bind can ease tensions and make the federating ethnicities/zones and the central government more stable. A wiser Buhari should have seized on this as a cover to launch sincere talks with Kanu.

The Nigerian President’s response to Biafra’s demands is therefore precisely the wrong response for a leader wishing to contain a popular demand for autonomy. It was, after all, Buhari’s unwise policy of selective exclusion that did most to spark the present calls for independence.

The question therefore is this: How can the national government in Abuja step back from an ultimate showdown, not only with a large chunk of its estranged citizens but with a watchful international community?

The answer is simple: President Buhari should know enough to stop stoking the fire of separatism, just as Mr Obasanjo has also suggested. As it is, if Nigeria breaks, it’s bound to be blamed most on Buhari’s ‘reverse separatism’ rather than the current Biafran agitation or what Mr Obasanjo called ‘smoldering agitations’, a thinly-veiled slip that a new agitation is in the offing.