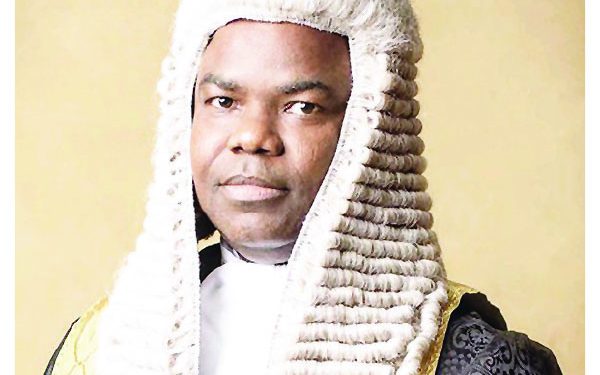 A Senior Advocate of Nigeria (SAN), Adeyinka Olumide-Fusika, has berated Nigeria’s political class over their selfish running of the country and warned that the nation is at the edge of a revolution that would either reposition it or break it. He spoke on various national issues.

These days, almost on a daily basis, we get reports of kidnappings and abductions in different parts of Nigeria, what do you make of the worsening security situation?

These cases, kidnappings and abductions are not new; you can actually situate them in the larger picture of what Nigeria has become or has been left to become over the years. As a private citizen of Nigeria, I want a conducive environment to do my work and live my life as privately as possible. It is not everybody that is interested in government, our interest is that things should work well in the country. During the administration of former President Goodluck Jonathan, Lai Mohammed and even President Muhammadu Buhari, who was then a presidential candidate were always attacking Jonathan, deservedly too, on the security situation. I warned then that we should not let politics blind us to the fact that Nigeria was facing an existential threat and that every Nigerian regardless of political affiliation needs to come together and solve the threat rather than looking at the issues from political angle alone. Today, Buhari is in-charge and that problem of insecurity continues. It is difficult for the current administration to mobilise Nigerians to unite and fight the insecurity because they were sectional and parochial in their views during the last administration. There is also no promotion of competence in the way things are done in Nigeria. The problem we have in Nigeria is that things are done based on ethnic and religious sentiments and this issue of security is just a symptom.

Pressure has been on President Muhammadu Buhari to replace the Service chiefs which he has so far ignored even after admitting that the best they did is not good enough?

Before these Service chiefs, we had problems with insecurity, so to give the impression that once you change them the problem of insecurity will be solved is giving ourselves false hope. I’m not saying they should not be removed, but if you remove them, what is the process of appointing new ones? Even if Buhari does his best to appoint what appears to him to be the best from those available, is the system such that it will allow such people to perform their duties? The system is such that there is a limited budget to prosecute the war because of dwindling resources but what other countries buy for N1, our system is set up to buy for N10 and they will not even buy the best quality for that inflated amount. Are they are even ready to die for the country? They will be sabotaged from within by those benefiting from the failure of Nigeria and they will do everything to protect their interest. The problems are so deep that all these face-value solutions cannot work. If you bring in new Service chiefs today, will they be able to re-engineer the system to ensure that they extract every value they can get from every kobo spent on fighting Boko Haram

You made reference to some people befitting from the insecurity, will that explain situations where troops are punished when they complain of inadequate weaponry to prosecute the war against Boko Haram, like Maj Gen Olusegun Adeniyi?

Most times, we don’t like those that tell us the truth because to solve Nigeria’s problem, there must be people who do not see things the way the generality of people see those things and they will go out of line. Such people will be seen as rebels to be dealt with. We saw the video of Adeniyi, what did he say? He was trying to encourage his men; he said that the troops are ready to fight but that they lack weapons, what is the big deal in that? Don’t the authorities know that the troops are not well equipped? The complaint which they didn’t state is that the video exposed them. If you look at the annual budget to fight Boko Haram, you will begin to wonder what is going on. Are we saying that Boko Haram has more resources than Nigeria that they will have weapons superior to that of the Nigerian Army? Are they better trained than the Nigerian army? The problem is that there are people who have positioned themselves to keep on milking Nigeria to death.

A recent Financial Times Editorial said Nigeria is on the brink of being a failed state, what is your take?

People paid attention to that Editorial because it was not written by a local newspaper. Nigerian newspapers have been writing the same thing but nobody listened. The editorial said we stand a chance of failing, but the truth is that we have already failed. If you have a dispute with someone and you go to the court, are you sure you will get justice and when you get justice, how many years will it take? There is a failure in that aspect. Why do our leaders go for medical treatment abroad? Is it that we don’t have competent Nigerian doctors? Most of the places they go to for medical tourism, you can be sure that it is Nigerian medical doctors that will attend to them, but the health sector has failed in Nigeria. Imagine a situation where university students have been at home for nine months and somebody calls himself Minister of Education and Minister of Labour, is that not failure? Do you know the percentage of Nigerians affected by this strike? It is not the students alone, even the parents are affected. Look at the roads, are they good? There is failure all around us but Nigerian leaders are not bothered; all they are interested in today is 2023 and if you ask them what they intend to do when they get there, they don’t know.

The flaws in the 1999 constitution are often blamed for most of the problems in the country. How can we get the country working?

There is no doubt that we can have a better constitution, especially regarding how we structured ourselves. But beyond that, there seems to be a problem with us as a people. The 1999 constitution as bad as it is, is not even being implemented. The 1999 constitution prescribes the principles of federal character to engender equity and fair-play, but has our experience since 2015 shown that such a fundamental principle of the constitution is being followed? It is not being followed. No matter how beautiful a constitution is, the citizens must be determined to ensure that it is implemented. That requires that the people must be educated, knowledgeable and be willing to make the sacrifice to ensure that we are governed by law not by the whims of individuals.

What is your take on the agitations for restructuring of the country?

We are unequally yoked in this country, our ideas, aspirations and perspective to life differ and we have been forced to live together. The issues of religion and tribe have made it difficult for Nigeria to progress, but we can’t wish it away. We need to have a constitution where everybody can be within his own space and still collaborate. In Nigeria today, we have a situation where some people are looking to the East, some are looking to the West and they all insist on having their way. How do you resolve such a situation? Where there is division and people do not have a common understanding of what progress is, there will always be a perpetual crisis in that country. That is the reason why the agitation for restructuring makes sense. Let us give each other some breathing space and allow one another to be what they want to be. Perhaps, that way Nigeria will begin to come back as the pride of the black race and begin to make progress. It seems increasingly impossible to insist that one Nigeria should remain when we can’t have a common consensus. This shows that we have not been able to build that bond of citizenship for all of us to agree on what we want Nigeria to be; the implication is that we are unfortunately moving towards disintegration.

Talking about moving towards disintegration, Prof Usman Yusuf, former executive director of National Health Insurance Scheme recently raised fears that 2023 elections may not hold, what is your take?

Prof Yusuf was actually talking about the security situation in Nigeria and how people are planning for 2023 when they are not sure there will still be Nigeria by 2023 given the level of insecurity. We agree with him that you can only conduct an election in an atmosphere of peace. But then our leaders have a way of manufacturing election results. During the 2019 election, there was high-level insecurity in especially Borno State, but the percentage of registered voters that cast their vote, especially in the presidential election was higher than places where there was relative peace. Those of us who are realistic agree with him that unless we address insecurity, his prediction may come true. We need to find a solution to the fundamental problems confronting us as a country. It is not about changing leadership in 2023. I think the Nigerian ruling class is determined to eat Nigeria to death. I don’t see any hope in the current crop of leaders, we have to go outside this present crop of ruling elite to find leaders.

How far outside the current crop of leaders should we go to save Nigeria?

The truth is that only a revolution will set things right in Nigeria and it is not wishful thinking; it is going to happen. It is like when you are digging the ground, you will get to a point where the forces of nature will take over; the oxygen level will become so thin or even poisonous. At that point, you will make a choice either to continue digging and die or find your way out. We are at that stage as a country. The revolution will happen, what I don’t know is whether it will be anarchical or purposeful. Purposeful revolution makes an impact, anarchical revolution does not bring leadership; anarchical revolution can lead to a situation where you have warlords controlling certain territories like in Somalia. That is the choice facing Nigeria, anarchy or revolution. The only way we can ensure that it is not warlords that benefit from that mass anger that is latent in the street is the challenge facing us not whether it will happen. I just hope we won’t become victims of warlords.