Tension as IPOB mobilize ahead of Nnamdi Kanu’s next… 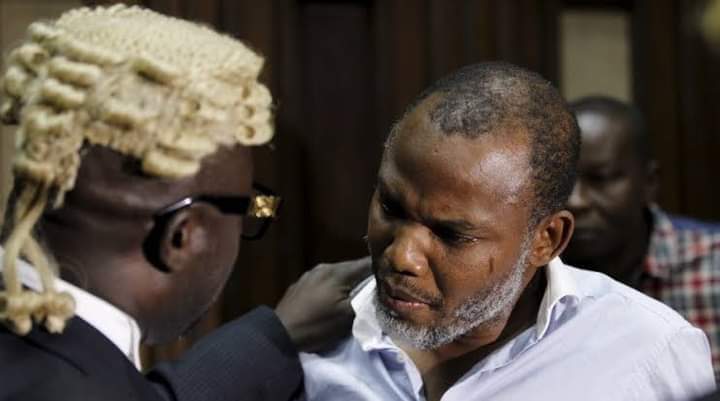 The Southern Youth Forum, SYF, has expressed concern over the continued detention of Nnamdi Kanu, the leader of the Indigenous People of Biafra (IPOB).

The group, which described the activist as a prisoner of conscience, warned that Nigeria risks serious consequences if he is not treated with care.

Comrade Chukwu Nna, President-General of the group, who spoke to OAK METRO on Tuesday, said, “we condemn the continued incarceration of Nnamdi Kanu by the administration of Muhammadu Buhari despite calls for his release and dialogue with his supporters who are the majority in the South.

“While the Boko Haram terrorists are released and amnestied, and the Fulani herdsmen who kill thousands of civilians on daily basis are ignored and protected by the government on the pretext that they should be given land for peace to reign;  Kanu, today, has become a prisoner of conscience for his belief in justice for the oppressed people of the south who are marginalized and mistreated in the country.”

Speaking further, the President-General of SYF accused the governors of the southeast of collusion with the federal government in the incarceration of Kanu.

“The governors of the south-east are involved in the continued detention of Nnamdi Kanu, they want him completely silenced because they believe that he is the obstacle preventing them from selfishly working against the interest of the people.

“If they don’t want him dead, they wouldn’t keep quiet or just say they are monitoring his trial. You can remain silent or monitor someone killing your child or brother only if you want him to die.

“As we continue to support and take all measures and prepare for further actions for the release of Nnamdi Kanu, we urge the federal government to handle him with care in order to avoid serious consequences which Nigeria and the people involved in his incarceration will not survive,” Nna said.