JUST IN: If I loose, it will not be the first time I am… 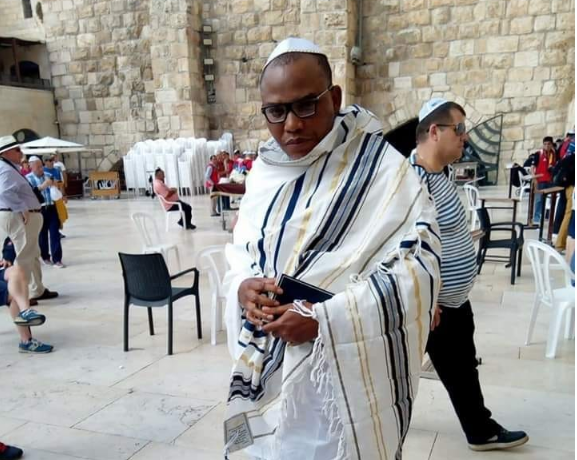 The Indigenous People of Biafra has derided Nigerian government for attributing to an alleged fake Igbo group a comment demanding the repatriation of its leader, Mazi Nnamdi Kanu.

There were reports that an Igbo professional group, Coalition of South East Professionals’ Network in Nigeria and Diaspora (CSEPNND), wrote an open letter to the Nigerian government, urging it to immediately write the governments of the United Kingdom and Israel, requesting the repatriation of Kanu to face the law for alleged treasonable felony.

The group whose request was contained in the open letter dated January 8th, 2021, and addressed to President Muhammadu Buhari, said his action was premised on Kanu’s alleged treasonable activities in the country.

Noting that Kanu possessed citizenship of the two foreign nations, the coalition, according to the letter signed by its National President, Prof. Madumere Chika and National Secretary, Mazi Anayo Uchemba, alleged that the IPOB leader was hiding under the cordial relationship between the two nations and Nigeria to plan and launch attacks on Nigeria with a view to destroying it.

However, IPOB, through its media and publicity secretary, Emma Powerful, described the comments as concocted schemes put together by the Nigerian government.

He also said they were ridiculous and disgraceful.

In a press statement titled ‘Call For Kanu’s Repatriation: An Attempt By A Criminally Complicit Government To Appear Relevant,’ made available to SaharaReporters on Sunday, Powerful said it was a confirmation that the leader of IPOB had become a nightmare for the Nigerian government.

IPOB also dared the Nigerian government to ask the signatories of the purported group to hold a press briefing if they ever existed.

“The use of fake and non-existent groups and associations by agents of the Nigerian government in a laughable attempt to blackmail our leader, Mazi Nnamdi Kanu, is confirmation that the Indigenous Peoples of Biafra (IPOB) is the greatest nightmare of the failed government of the Federal Republic of Nigeria,” Powerful said.

“We find it amusing that a purported statement was circulated and credited to another Department of State Services manufactured non-existent group they named Coalition of South East Professionals Network in Nigeria and Diaspora (CSEPNND), all in an effort to give the erroneous impression that a handful of Efulefus is against the IPOB-led effort to restore Biafra.

“A ghost group that only exists in the deranged mind of DSS propaganda unit operatives, in which it was reported the said group petitioned the UK and Israeli governments requesting the repatriation of our leader, Mazi Nnamdi. How utterly ridiculous!

“Why DSS has chosen to continue to disgrace itself by creating these fake groups is beyond human comprehension. Such a weak and tactless strategy will not distract us. If indeed such a group exists, why can’t they conduct a live press briefing to convince the people of Biafra they are real by showing us their faces?”

ALSO READ:  'You have no power in Imo State' — Uzodinma tells IPOB

The group alleged that there had been attempts in the past by the government to create fake groups in a bid to weaken IPOB.

It continued, “This same ineffective strategy has been tried in the past when they created their fake new–IPOB, IPOD, RENPOB, RENIPOB, SEXIPOB and other non-existent groups using fake Igbo names as signatories. They failed then; they will also fail again this time.

“Our response to such a lame script has not changed. If the so-called CSEPNND is real and identifiable, let them show us their faces, give us their contact address so we can take them seriously. If the self-acclaimed leaders of CSEPNND – the imaginary Professor Madumere Chika, and Mazi Anayo Uchemba, are not robots but truly Igbo sons as they claimed, let them mention their communities and kinsmen.”

“It’s high time the DSS left Nnamdi Kanu and IPOB alone and thought of better ways to justify their salaries. It’s too late to stop the Biafra project. The night is far spent and the day is almost here,” the statement added.

An Igbo professional group, identified as Coalition of South East Professionals’ Network in Nigeria and Diaspora (CSEPNND), had on Saturday written an open letter to the Nigerian government, asking it to urgently write the United Kingdom to request the extradition of Kanu.

ALSO READ:  CORONAVIRUS: Black Friday In Italy As Over 626 Dies Within 24 Hours, Highest Single Day Deaths In The World

The open letter said, “We are constrained to write this open letter to the Federal Government of Nigeria through the President and Commander-In-Chief of the Armed Forces of Nigeria, Muhammadu Buhari, to immediately write the Government of the United Kingdom, requesting the extradition of our fugitive son and founder of Indigenous People of Biafra, Nnamdi Kanu, to Nigeria to continue his trial over alleged treasonable felony.

“He has no doubt, followed the threat with a number of attacks on the country apart from the formation of a militia group which information at our disposal suggests he has armed to the teeth to fight the Nigerian Government.

“We call on the Federal Government of Nigeria being ably led by President Muhammadu Buhari to direct the Attorney General of the Federation and Minister of Justice, Abubakar Malami, whose ministry deals with all extradition issues, to immediately forward extradition request on Kanu to the UK for action. The coalition, on the other hand, called on the United Kingdom and Israel, to deny the leader of the proscribed Indigenous People of Biafra (IPOB), Nnamdi Kanu, the freedom of using the privilege of his foreign citizenship to incite violence against the Federal Republic of Nigeria.”