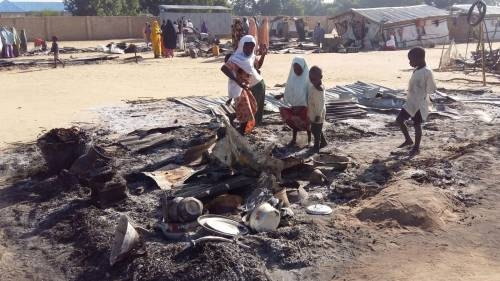 SAHARANEWS – As insecurity in Nigeria continues to be on the rise, a new report by the Civic Media Lab has revealed that 223 Nigerians were killed by both state and non-state actors in February 2020.

The life count report, which details deaths from daily news reporting in the country, revealed that while 55 persons were killed by bandits, police killed five civilians in extrajudicial activities in the country for that month.

The report highlighted how non-state actors have continued to hugely contribute to the killings in the country.

This has further raised questions on the ability of President Muhammadu Buhari to contain and put an end to the situation in the country.

According to the life count report; bandits and gunmen perpetuated most of the killings in the month of February as they were both responsible for 118 deaths.

While noting a significant decrease in the activities by Boko Haram in the country, insecurity peaked when Boko Haram attacked Auno Village in Borno State, killing 30 persons in the process.

Herdsmen, regarded as one of the deadliest groups in the world, also accounted for 22 deaths in the month with their activities majorly occurring in the Southern part of the country.

In the month of February, herdsmen killed six people in Plateau, 14 in Delta, and two in Edo State.

According to demography, Kaduna recorded the highest deaths with 42 persons killed followed by Katsina, 37, and Borno, 33.

He added that the call for the sack of security chiefs over their inability to secure the country was not out of place, urging government to also tackle poverty as it was the harbinger of insurgency.