“Nigerians Never had It This Bad, Under Buhari Kidnappers Demand Food Items As Ransom” – Ex Lawmaker 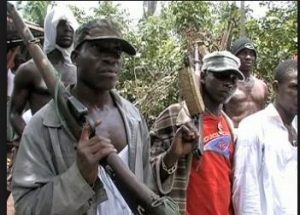 SAHARANEWS – The Ogun state police command has confirmed the arrest of kidnappers who collected N3.5m, a carton of schnapps, 30 liters of palm oil and 10 tubers of yam as ransom before releasing their hostages.

The kidnappers were said to have abducted three persons in Ode-Omi, Ogun waterside Local Government Area of the state.

Confirming the arrest, Abimbola Oyeyemi, the Police Public Relations Officer in Ogun State, said they were arrested after an ambush was laid for them around the creek.

ALSO READ:  I have moved to Abuja – Tinubu tells Atiku

“Four of the kidnappers who abducted the three people, including the son of a chief imam at Ode-Omi in Ijebu waterside on Salah day, have been arrested this morning by the police.”

“They were planning to relocate from the creeks. On Wednesday, we surrounded them and laid an ambush for them.

“We allowed them to enter their vehicle and as they attempted to leave, we rounded them up and arrested them with their guns and other ammunition.”