“IPOB:As far as values are concerned, we don’t need any… 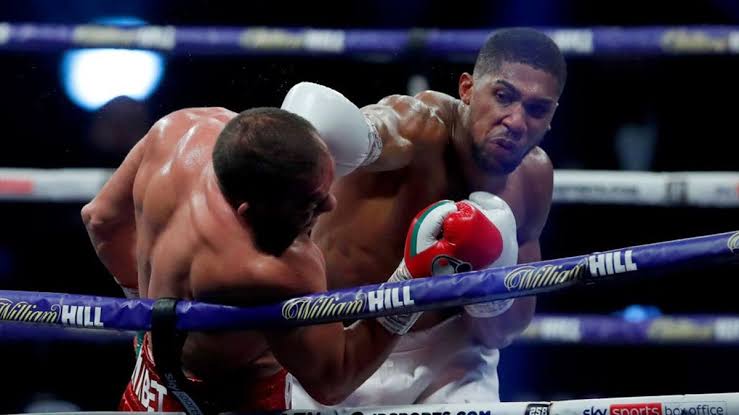 British-Nigerian boxer, Anthony Joshua, knocked out Bulgarian boxer, Kubrat Pulev, in the ninth round of their world title bout at the SSE Arena, Wembley, to retain his WBA (Super), IBF, WBO, and IBO heavyweight titles.

The fight is Joshua’s first since reclaiming his belts from Andy Ruiz in December 2019 in Saudi Arabia.

Both boxers were cautious in the first two rounds with Joshua using more of his jabs.

Pulev has been unbeaten in his last eight fights since losing via knockout to Wladimir Klitschko in 2014. The 39-year-old won 28 of his previous 29 with 14 by way of knockout.

ALSO READ:  (VIDEO NEWS) XENOPHOBIA: When A Govt Is Insensitive To Matters That Requires Actions, The People Takes Laws Into Their Hands - See Videos

South African referee Deon Dwarte stopped the fight after the ninth round knocks down.

Both fighters come into the bout with one loss apiece. Joshua lost his only fight in a shocking defeat to Andy Ruiz in 2019 while Pulev’s only loss was a fifth-round knockout loss in the hands of Wladimir Klitschko in 2014.

Okolie knocked down his opponent twice in the first round, forcing the referee to call off the fight in the 1:45 minute after his second-round knockdown of Jezewski.

Okolie is on course for a WBO cruiserweight title fight next year.

Meanwhile, celebrities have taken to their social media pages to congratulate the boxing unified heavyweight champion of the world, Anthony Joshua, over his win in his match against Kubrat Pulev, Punch reports.

Joshua’s pal, DJ Cuppy, daughter of billionaire business Femi Otedola, went on Twitter to congratulate the champ. She tweeted, “WHOOP! Congrats to @AnthonyFJoshua and my family! …Where are we going for Christmas champ?”

In his tweet, prolific rapper, Vector, revealed that he has never seen a man receive so many jabs in his life. “I have never seen a man take this many uppercuts. Him lower jaw na usher wey Dey receive incoming ‘hands’.

Music executive, Bankuli, took to his Instagram page to post a picture of the champion and captioned it, “And still standing tall @anthonyjoshua knocked Pulev down thrice.”

The funnyman, Owen G, also used his Instagram account to congratulate Joshua over his win. He posted a picture of the boxing champion with the caption, “Congrats AJ @anthonyjoshua, dem nor reach. Eba must always overpower bread and tea.”

JUST IN:Afenifere Reacts To Kidnap Of Schoolboys In Katsina